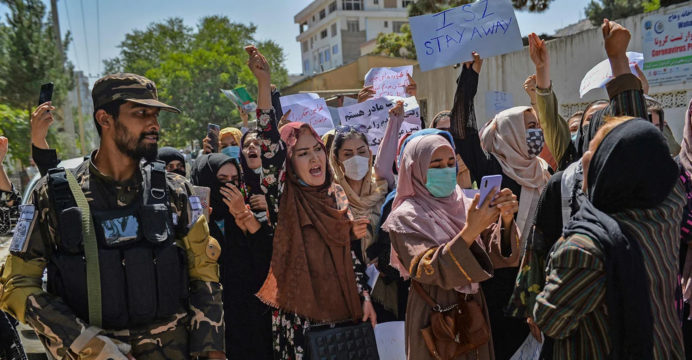 Hundreds of people gathered at various protests in Kabul on Tuesday when the Taliban fired rounds into the air to disperse them, the latest show of defiance by Afghans against the hardline Islamist organization that stormed to power last month.

Although Afghanistan’s new rulers have yet to create a cabinet, many in the city fear a recurrence of the Taliban’s cruel and repressive rule from 1996 to 2001.

At least three protests were organized around Kabul in an outpouring of defiance that would have been unthinkable during the Taliban’s previous reign of terror, when people were publicly executed and thieves’ hands were chopped off.

“Afghan women desire independence for their homeland. They want to rebuild their country. We’re exhausted “At one gathering outside the Pakistani consulate, where more than 70 individuals, primarily women, had assembled, protester Sarah Fahim told AFP.

“We want everyone in our community to have a normal life. How much longer are we going to be in this situation?” said the 25-year-old.

The gathering waved banners and sang about their dissatisfaction with security, free exit from the nation, and suspected intervention by Pakistan, which has historically had close links to the Taliban leadership.

Pakistan, one of only three nations to recognize the former Taliban government, has long been accused of providing safe haven to its officials after the US-led invasion of Afghanistan in 2001.

Faiz Hameed, Pakistan’s intelligence chief, was in Kabul over the weekend, purportedly to be briefed by his country’s ambassador but also to meet with Taliban officials.

A separate gathering was captured on video and shared on social media, with over a hundred people marching through the streets under the careful eye of armed Taliban members.

Another protester, a doctor from Kabul named Zahra Mohammadi, said: “Afghanistan must be liberated. We want to be free.”

In recent days, sporadic rallies have taken place in smaller cities, such Herat and Mazar-i-Sharif, where women have requested to be included in a new administration.