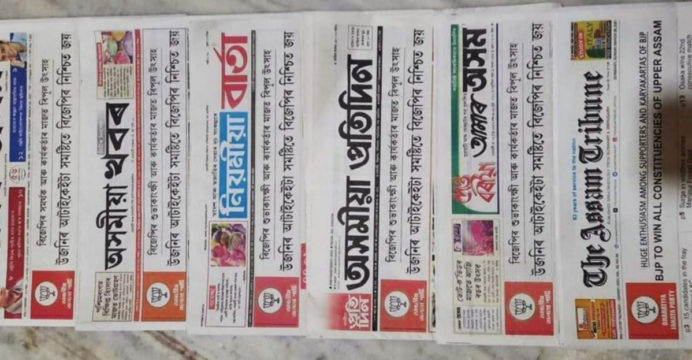 Self-reform and financial transparency in media need of the hour

Can the mainstream newspapers and satellite news channels be compelled to make their annual balance sheets public in India? Or will it be possible to ask the professional journalists to go for self-declarations about their assets so that they can question the financial integrity of individuals in other professions including in politics!

As the Union information & broadcasting ministry in New Delhi has taken initiatives to review the guidelines for working journalist’s welfare schemes, a northeast India based scribes’ body urged the mainstream media houses and seasoned journalists of the country to display transparencies in their financial transactions to qualify for such benefits.

Journalists’ Forum Assam (JFA), in a recent media statement, opined that the professional media houses should show their financial balance-sheets describing how much money they spent annually for the benefits of their regular employees including the working journalists.

At the same time the so-called rich and glamorous journalists should reveal their assets (along with liabilities) as they demand transparencies from employees in other sectors. It becomes necessary to reduce the erosion in goodwill from their valued readers, listeners and viewers before it’s too late, asserted the forum.

Mentionable is that the I&B ministry (under the Government of India) decided to have a look at the existing guidelines of various journo-welfare schemes and get appropriate recommendations for the required changes. The changing media scenario has made it necessary to redefine the professional guidelines of journalists, who are duly engaged with both traditional and modern/digital media outlets.

The review committee is expected to maintain the parity between the government accredited (recognized) and non-recognized scribes as the acknowledgement rules may vary from one State to another. For any reason, an accredited journalist should not be considered as an elite, because the status could be altered abruptly with the change professional portfolios in the media houses.
Headed by renowned journalist Ashok Kumar Tandon, the committee comprises senior scribes namely Sachidanand Murthy, Shekhar Aiyar, Amitabh Sinha, Shishir Kumar Sinha, Ravinder Kumar, Hitesh Shankar, Smriti K Ramachandran, Amit Kumar, Vasudha Venugopal along with Kanchan Prasad from Press Information Bureau as its members and it is expected to submit the report within two months.

According to the government run Registrar of Newspapers for India (RNI), the country with one billion plus population has over 1,15,000 registered publications with more than 17,500 in the newspaper category. Those are published in different languages including English, Hindi, Urdu, Sanskrit, Bengali, Tamil, Telugu, Marathi, Malayalam, Kannadi, Gujarati, Punjabi, Odia, Assamese, etc.
Largest democracy of the world has over 1,600 satellite television channels where more than 400 are news related outlets. At the same time, over 300 million Indians use social media in different categories. Lately many professional Indian journalists have abandoned the mainstream media (where many of them were sacked by the managements) and joined the digital platforms to exercise the freedom of expression guaranteed by the country’s constitution.

“We need to discuss on the importance of digital (alternate) media urgently and if the journalists engaged with those outlets could be recognized as working journalists enabling them to receive all kinds of legitimate government benefits,” said JFA president Rupam Barua, adding that the professional journalists should establish their integrity first as an exemplary manner.

Earlier, the forum commended the concern expressed by Madras High Court in a recent directive to Tamil Nadu government to constitute a press council so that the menace of fake news/journalists can be legally addressed. The court ordered the State government in Chennai to form ‘Press Council of Tamil Nadu’ within three months to eliminate the bogus journalists from the media fraternity.

The court observed that it becomes a common sight these days to find posh cars with ‘Press’ stickers on the front windshield being driven by unscrupulous fraudsters masquerading as working journalists. There have been quite a number of instances of such fraudsters being booked by the police. Politicians, land sharks, smugglers and even murderers have been seen to be hand in glove with these journalists.

The State directorate of information and public relations is aware of this, but the officials turn a blind eye, to avoid any wrath in the hands of those fake journalists. This needs to be stopped to ensure that journalism remains clean and strong. In view of the above position, necessary directions have to be issued to clean up the media in the interest of public, added the court observation.

The court even asked the government to avoid allotting any house or grant directly to any applicant journalists unless it is routed through the council to be constituted, which after due diligence can issue such benefits. It shall prohibit conduct of State conferences or meetings by journalist’s associations without permission or approval from the council, which shall get details on the source of income and other relevant details before giving permission to them.

The common people aggrieved by the fake news or motivated and agenda-based news can send their complaints on fake journalists to the welfare board, which shall inquire and initiate criminal action against such scribes as they are simply a menace and threat to the society. The council is proposed to have the power to direct the carrier of offending news items for a rejoinder or an apology urgently.