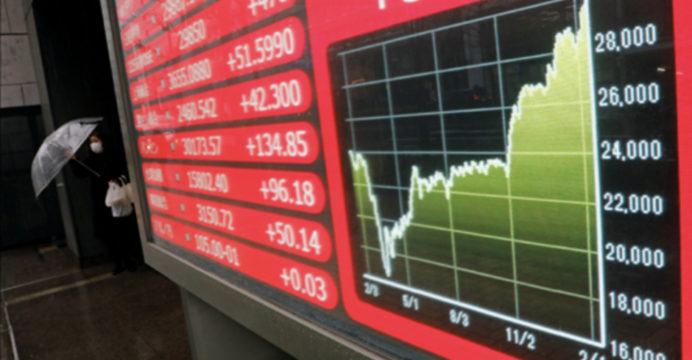 Asian markets mostly rose on Friday ahead of a much-anticipated speech by Federal Reserve chief Jerome Powell on plans for tapering monetary policy with some top bank officials calling for a move within months.

The positive start to the day came as traders brushed off a drop on Wall Street, though sentiment was jolted by geopolitical concerns after a suicide attack at Kabul airport that left dozens dead, including 13 US servicemen.

While the spread of the Delta variant of Covid has raised concerns about the global recovery outlook, the general consensus is that the vast sums of financial support provided by the Fed will likely come to an end next year as the economy gets back on track, reports BSS.

Powell’s address to the annual Jackson Hole symposium of central bankers and economists later Friday will be closely watched for an idea about plans to reduce the bond-buying that has helped support the pandemic recovery, though a timetable is not yet expected.

Analysts say the timing of the taper is crucial as it could also give an indication of when to expect interest rates to go up. Still, three leading Fed officials have called for the bank to begin winding down soon.

Dallas Fed president Robert Kaplan said he was eyeing an October move or shortly after.

The hawkish Kaplan had surprised many last Friday by saying he was open to rethinking his view on withdrawing support in light of the spread of Delta, but in an interview Thursday said his latest position was based on conversations with business contacts.

“An announcement on tapering is highly likely to come before the end of the year, something even the doves on the committee seem to agree on,” said National Australia Bank’s Tapas Strickland, pointing out that policy meetings are set for September, November and December.

“What will be as much, if not more important than the start date will be how quickly the Fed decides to taper and whether the Fed attempts to de-link the market’s perception that tapering ‘starts the clock ticking’ on rate hikes.”

Asian investors were on course to end the week as they started, with gains in most markets.

Hong Kong and Shanghai were among the best performers, helped by reports that China’s central bank was looking at fresh ways to support businesses, with a cut in the amount of cash that lenders must keep in reserve being considered.

Oil prices, which have enjoyed a strong run this week after recent hefty selling, extended gains as traders buy into the view that Delta’s spread will only delay the economic recovery and demand will continue to improve.

OANDA’s Edward Moya said WTI will likely hover around $68 a barrel until OPEC and other key producers signal their plans for output next month and whether a storm in the Gulf of Mexico will hit supplies.

“A big question for energy traders remains what will happen with Iran sanctions and if they are lifted how much crude could rush back to the market,” he added, referring to talks with Tehran over its nuclear programme.

“The oil market is still heavily in deficit, but eventually Iranian crude will be a primary catalyst fuelling oversupply fears later in 2022.”