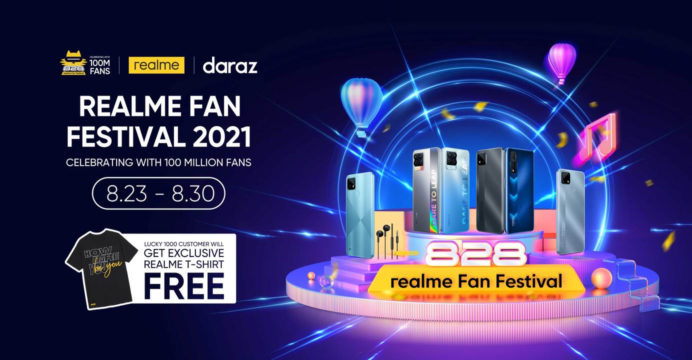 realme celebrates fan fest every year and this year realme celebrated with 100 million fans all around the world. Globally, they have launched realme GT series and realme book as well during this event. To celebrate fan fest in Bangladesh, this year realme is arranging ‘realme Fan Festival 2021’ in renowned e-commerce site Daraz from 23rd August to 30th August.

Apart from the online offers, on the 28th of August realme is also offering their exclusive fan fest t-shirts on purchase of their smartphones in all their brandshops.

The narzo series is the gaming series of the brand, with gaming processors and features which make gaming faster and smoother. Phones from narzo series has already earned repute among gaming enthusiasts who look for uninterrupted and smooth gaming experience. Earlier, realme launched narzo 30A in March in the Bangladeshi market, which became quite popular among the young gamers within a few days. Their upcoming phone will also be from that series.

realme is developing a diverse portfolio of 5G products with an aim to offer 100 million 5G phones in the next three years to the young users. Besides affordable 5G phones, realme will also bring more AIoT products to young consumers as realme has entered AIoT 2.0 development phase with its advanced ‘1+5+T’ strategy. According to Canalys, realme also became the top 1 smartphone maker in Bangladesh during Q2, 2021.