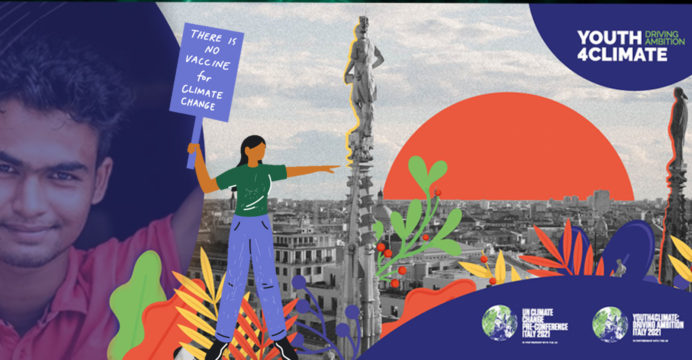 In Milan, the voices of young people must be heard: Md. Shameem Ahsan

In the Pre-COP & youth event, which will be held in Milan next month, Bangladesh is aiming to raise the voices of unheard young people. Bangladesh is a role model for the world in terms of climate change adaptation, according to Md. Shameem Ahsan, Ambassador of Bangladesh to Italy and Permanent Representative to FAO, IFAD, and WFP. Bangladesh is self–sufficient in food production under Prime Minister Sheikh Hasina’s leadership and directives.

For food security, he stressed reducing reliance on imported food and consuming locally produced food. Ambassador Md. Shameem Ahsan spoke as the chief guest at a virtual event co-hosted by YouthNet for Climate Justice and Protiki Jubo Sangshad (Bangladesh Model Youth Parliament) on 17 August 2021 as part of the preparations for the Milan Youth Summit 28-30 September 2021, followed by the Pre Cop 30 September – 02 October 2021. The ambassador would look at how Bangladesh could benefit from the efforts of various UN agencies on climate-resilient agriculture.

More than fifty-five young people, mostly from Bangladesh’s coastal belt, as well as representatives from their partner organizations ActionAid, Prokas-British Council, and ICCCAD, attended the debate. Shakila Islam, Youthnet’s main coordinator, presided over the event, which was moderated by Sohanur Rahman, Chief Executive of the Model Youth Parliament, who provided a PowerPoint presentation on why young people’s voices should be heard, as well as their role and aspirations in climate justice.

The Ambassador of Bangladesh began his speech by thanking the organizers for inviting him. He praised the admirable work of ridays for Future Bangladesh and YouthNet for Climate Justice, which are on the front lines of addressing the difficulties faced by climate change. Ambassador Ahsan shared with the young delegates the outcomes of the recently concluded UN Food Systems Summit (UNFSS) Pre-Summit, held in Rome from the 26th to the 28th of July 2021, where he, on behalf of the Bangladesh delegation, articulated its position to form the proto coalition on Climate-Resilient Food Systems (Resilient Food Supply Chains: Local Production for Local Consumption). He emphasized the need of linking the climate and food agendas both within the FSS process and beyond, noting that Bangladesh is keen to chair the 48-member Climate Vulnerable Forum. Bangladesh is now expected to be one of the nations leading the coalition on this subject for obvious reasons, and the Bangladesh Embassy in Rome is currently working with additional countries to join the coalition so that we can move the coalition ahead in the UNFSS and beyond, he added. He urged that the food system not be treated as a COP issue, but rather as an ongoing concern. Because he believes that hunger and climate change are linked. 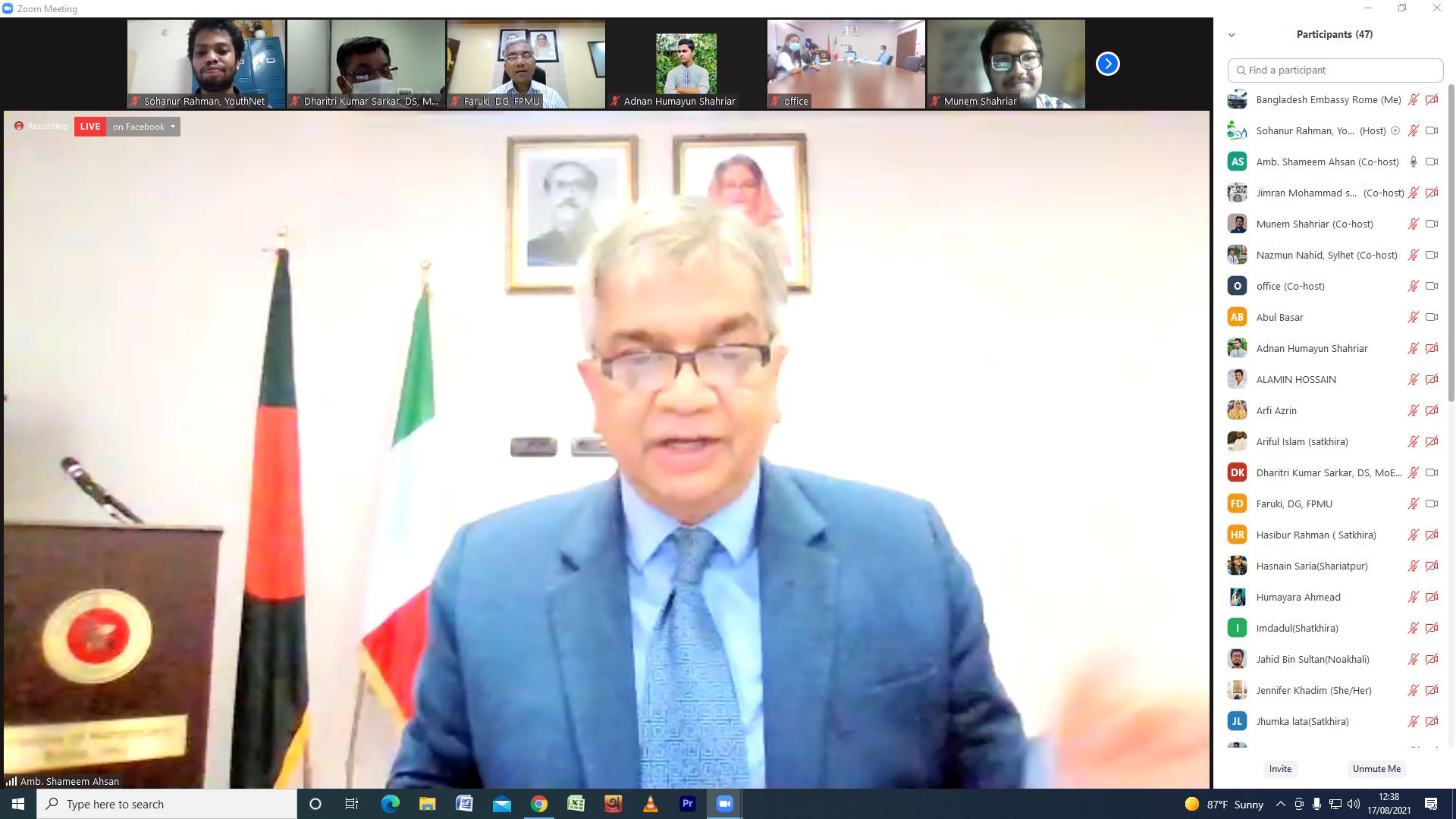 Mr. Shahiduzzaman Faruki, Director General, Food Planning and Monitoring Unit, Ministry of Food, and Mr. Dharitri Kumar Sarkar, Deputy Secretary, Ministry of Environment, Forest and Climate Change, were among the young leaders who mounted the stage and asked the panellists various questions. Their inquiries primarily focused on increasing the involvement of youth communities in climate action and decision-making. The Bangladesh Ambassador discussed recent moves by UN organizations stationed in Rome to incorporate adolescents in various governing body events. He mentioned the impending CFS49 (Committee on World Food Security) gathering, which encourages Member Countries to involve youths in their official delegations. While reiterating his commitment to urge the Italian government, which is co-hosting COP26 with the United Kingdom, to include youth groups in the upcoming youth summit, Ambassador Ahsan also urged the Ministries to consider including youth groups in the official delegation so that their voices are heard at the global level. Mr. Abul Basar, IBP Manager of the British Council’s PROKAS program, Jennifer Khadim, ICCCAD’s Youth coordinator, and Mr. Nazmul Ahsan, Manager-Young People of ActionAid Bangladesh, all spoke about the importance of youth participation in many disciplines.

The Dialogue came to a close with the hope that such interactive, interfacing will continue in the future, particularly to make the Youth Summit more participative and meaningful. Mr. Manash Mitra, Economic Counsellor and Alternate Permanent Representative (APR) to UN Agencies in Rome, Mr. ASM Sayem, Political Counsellor, and Ms. Sufia Akter, First Secretary (Political), were in attendance.