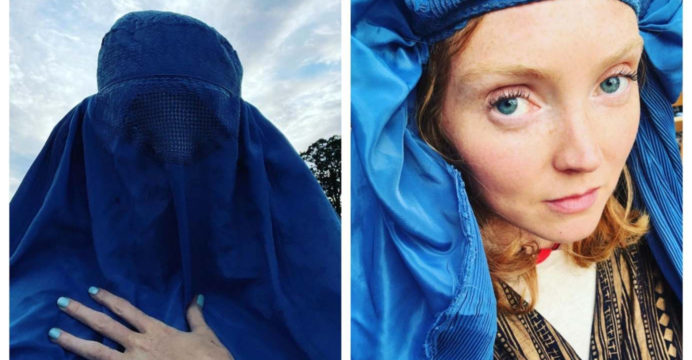 Model, actress and activist Lily Cole has apologised for posting a picture of herself in a burka as a way to “embrace diversity” and promote her new book.

Critics said posing in the garment, worn by some Muslim women, did not help diversity and was ill-advised given the current unrest in Afghanistan, reports BBC.

Cole said she understood why the image upset people and wanted to “sincerely apologise for any offence caused”.

She agreed it was “ill-timed” and said she “hadn’t read the news at the time”.

Cole, 33, posted the pictures as Afghanistan was being taken over by the Taliban, who forced women to wear the burka when they were last in control there in the 1990s.

One photo showed her with a blue burka covering her face and body, and in another the garment was pulled up to reveal her face.

She used the same post to promote her new book Who Cares Wins, about how to tackle the climate and ecological crisis.

Anjum Peerbacos, co-founder of the Hijabi Half-Hour podcast, said the pictures were “disrespectful”.

“It’s not a fashion accessory to be able to be deployed as a publicity stunt,” she told BBC News.

“Regardless of how people around the world have chosen to wear that garment, that garment is a respectful religious symbol and is worn and used as such.

“So for her to use it as what can only be described as a publicity stunt, I think is abhorrent and really displays to us her level of ignorance with regards to it.”

“You can’t embrace diversity if you are still the white woman dressing in ethnic clothing. That’s not embracing diversity,” she said.

“If you are serious about it and you’re passionate about it and you want to see diversity normalised, you bring women forward that are from that diverse background and you platform them.”

Speaking about the situation in Afghanistan, Ali-Khan added: “I understand the mentality and the subject of subjugation and the men who want women to be subservient, and the hijab and burqa, in that part of the world, will always be used as a tool to oppress and a tool for women to cover up for the sake of men.”

She wrote: “This week, I posted an old photo of me wearing a burqa loaned to me by a friend, as she pointed out I was undermining its original purpose by wearing it with my face exposed, but I understand why the image has upset people and want to sincerely apologise for any offence caused.

“I hadn’t read the news at the time I posted so it was incredibly ill-timed (thank you for pointing that out to me).”

She added that her “heart breaks reading about what is happening in Afghanistan at the moment” and said she was “looking for organisations helping women on the ground I can support”.

Cole began modelling in her teens and was named British Model of the Year in 2004.

She was a regular on the front covers of magazines and in advertising campaigns, and starred in films like St Trinian’s and The Imaginarium of Doctor Parnassus, and TV shows including Elizabeth I and Doctor Who.

She graduated with a double first from the University of Cambridge, and in recent years has become known for her charity work and environmental campaigning.

She has a child with husband Kwame Ferreira, but this weekend told The Sunday Times she is queer, saying: “I feel the need to acknowledge that I am not straight.”