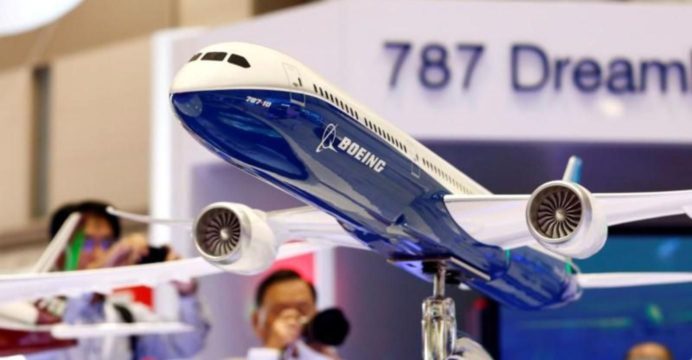 Boeing is cutting production on the 787 Dreamliner after identifying a new problem with the plane, the company announced Tuesday in the latest in a series of setbacks as the aviation giant struggles to fully recover from a lengthy slump.

Boeing said that while inspecting the 787 jets, it “identified additional rework that will be required.”

The Federal Aviation Administration (FAA) described the problem as a “manufacturing quality issue near the nose on certain 787 Dreamliners,” an agency spokeswoman said, reports BSS.

“Although the issue poses no immediate threat to flight safety, Boeing has committed to fix these airplanes before resuming deliveries,” the FAA said, adding that the company also will analyze whether 787s already in service should be modified.

The latest problem increases the headwinds facing Boeing even as the travel industry begins to rebound from the deep downturn caused by Covid-19 and commercial airlines announce significant new plane orders.

The company’s shares tumbled on the announcement, falling 4.2 percent to $228.20 at the close of Tuesday’s trading, making it the biggest loser in the Dow.

The manufacturer is “reprioritizing production resources for a few weeks” and will reduce 787 production on a “temporary” basis below the current rate of five a month, which is just over a third of the pre-pandemic level of 14 per-month.

Boeing expects to deliver fewer than half of the 100 aircraft now in its inventory, while it previously expected “the majority” to be delivered this year.

The latest problem on the dual-aisle plane comes after a string of issues on Boeing’s top-selling aircraft in recent months.

The aviation giant was in a much more dire place about 15 months ago when the travel industry was in free fall and the company under criminal investigation over the 737 MAX, which was grounded after two deadly crashes.

Things have since improved, with the air travel outlook now significantly better due to widespread availability of Covid-19 vaccines, the FAA clearing the MAX to resume service in November 2020 and a $2.5 billion settlement with the US Justice Department over the MAX saga.

But Boeing has struggled to fully get back on track.

The company suspended 787 deliveries from November to March due to production problems, and halted them again in May when it was unable to reach an agreement with the FAA on the inspection method for the planes.

Boeing also suspended deliveries of the MAX for about six weeks this spring due to electrical problems discovered during the manufacturing process.

But reducing production is more significant than the delayed deliveries “as it ripples down through the supply chain — and the supply chain cannot just be turned on and off like a switch,” Vertical Research Partners said a note.

Delivery delays mean some clients could receive their 787s more than a year late, Vertical said.

“This again gives the impression that Boeing has not got its house in order, and that it is falling further behind as other aerospace companies start to enjoy the early signs of an aerospace recovery,” Vertical said.

Richard Aboulafia, an aviation expert at Teal Group, said the latest 787 issue appears to be “relatively minor issue,” but noted a pattern of problems.

“Unfortunately, almost all of their civil and military programs are having technical execution problems, so I don’t think anyone’s to blame other than them,” he said in an email to AFP.