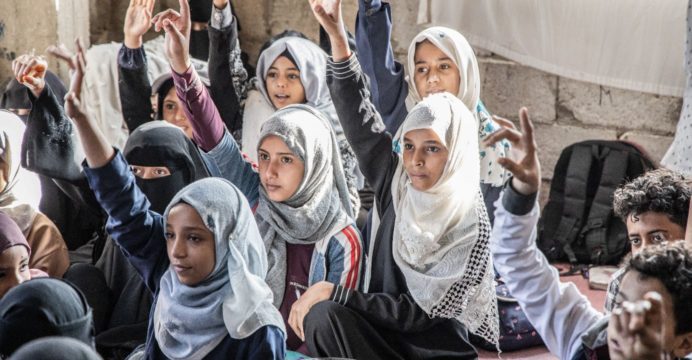 The number of children facing education disruption in Yemen could rise to 6 million, UNICEF warns

Six years on, Yemeni children’s education has become one of the greatest casualties of Yemen’s devastating and ongoing conflict, according to a new report published by UNICEF today.

Just over 2 million school-age girls and boys are now out of school as poverty, conflict and lack of opportunities disrupt their education. This is double the number of out-of-school children in 2015 when the conflict started.

The report, ‘Education Disrupted: Impact of the conflict on children’s education in Yemen’, looks at the risks and challenges children face when out of school, and the urgent actions needed to protect them.

“Access to quality education is a basic right for every child, including for girls, displaced children and those with disabilities,” said Philippe Duamelle, UNICEF Representative to Yemen.

“The conflict has a staggering impact on every aspect of children’s lives, yet access to education provides a sense of normalcy for children in even the most desperate contexts and protects them from multiple forms of exploitation. Keeping children in school is critical for their own future and the future of Yemen.”

The report highlights that when children are not in school, the consequences are dire, both for their present and their futures.

Girls are being forced into early marriage, where they remain trapped in a cycle of poverty and unfulfilled potential. Boys and girls are more vulnerable to being coerced into child labour or recruited into the fighting. More than 3,600 children in Yemen were recruited in the past six years.

To make matters worse, two-thirds of teachers in Yemen – over 170,000 teachers in total – have not received a regular salary for more than four years because of the conflict and geopolitical divides. This puts around four million additional children at risk of disrupted education or dropping out as unpaid teachers quit teaching to find other ways of providing for their families.

Children who do not finish their education are trapped in a self-perpetuating cycle of poverty. If out-of-school children or those who have dropped out recently are not properly supported, they may never return to school.

The combined effects of the prolonged conflict and the latest assault on education in the form of the COVID-19 pandemic will have devastating and long-lasting effects on the learning as well as the mental and physical well-being of children and adolescents in Yemen.

In the report, UNICEF calls for all stakeholders in Yemen to uphold children’s right to education and work together to achieve lasting and inclusive peace. This includes stopping attacks on schools – there have been 231 since March 2015 – and ensuring teachers get a regular income so that children can continue to learn and grow, and for international donors to support education programmes with long-term funding.