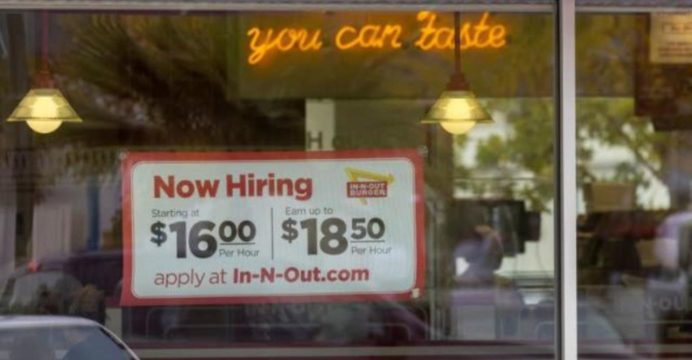 U.S. job growth likely picked up in June as companies, desperate to boost production and services amid booming demand, raised wages and offered incentives to lure millions of reluctant unemployed Americans back into the labor force.

The Labor Department’s closely watched employment report on Friday will likely show that the economy closed the second quarter with strong growth momentum, following a reopening made possible by vaccinations against COVID-19. More than 150 million people are fully immunized, leading to pandemic-related restrictions on businesses and mask mandates being lifted, reports Reuters.

Despite the anticipated acceleration in hiring, employment gains would probably still be less than the million or more per month that economists and others had been forecasting at the beginning of the year.

“There are jobs, but workers are not there,” said Sung Won Sohn, professor of finance and economics at Loyola Marymount University in Los Angeles.

The minimum pay workers will accept has risen significantly since the pandemic began, he said, “and many workers have an inflated view of what their skills are worth and as a result they are not willing to go back to work at the prevailing wage.”

According to a Reuters survey of economists, nonfarm payrolls likely increased by 700,000 jobs last month after rising 559,000 in May. That would be more than the 540,000 monthly average over the past three months. Still, employment would be about 6.9 million jobs below its peak in February 2020.

Estimates ranged from as low as 376,000 to as high as 1.05 million. The unemployment rate is forecast dipping to 5.7% from 5.8% in May. The jobless rate has been understated by people misclassifying themselves as being “employed but absent from work.” There are a record 9.3 million job openings.

Politicians, businesses and some economists have blamed enhanced unemployment benefits, including a $300 weekly check from the government, for the labor crunch. Lack of affordable child care and fears of contracting the coronavirus have also been blamed for keeping workers, mostly women, at home.

There have also been pandemic-related retirements as well as career changes. Economists generally expect the labor supply squeeze to ease in the fall as schools reopen and the government-funded unemployment benefits lapse but caution many unemployed will probably never return to work. Record-high stock prices and surging home values have also encouraged early retirements.

“Labor shortages may become less of a constraint from September, but there is no guarantee, given evidence to suggest potentially more than 2 million people have taken early retirement in the past year,” said James Knightley, chief international economist at ING in New York.

According to job search engine Indeed, 4.1% of jobs postings advertised hiring incentives through the seven days ending June 18, more than double the 1.8% share in the week ending July 1, 2020. The incentives, which included signing bonuses, retention bonuses or one-time cash payments on being hired, ranged from as low as $100 to as high as $30,000 in the month ended June 18.

Some restaurant jobs are paying as much as $27 per hour plus tips, according to postings on Poachedjobs.com, a national job board for the restaurant/hospitality industry. The federal minimum wage is $7.25 per hour, but is higher in some states.

“The fact is, competition for talent is going to become brutal,” said Ron Hetrick, director of staffing products at Emsi, a labor market data firm in Moscow, Idaho. “Businesses can no longer assume there will be enough people to go around.”

Average hourly earnings are forecast rising 0.4% last month after increasing 0.5% in May. That would boost the year-on-year increase in wages to 3.7% from 2.0% in May. Annual wage growth will in part be flattered by so-called base effects following a big drop in earnings last June.

With employment not expected to return to its pre-pandemic level until sometime in 2022, rising wages are unlikely to worry Federal Reserve officials even as inflation is heating up because of supply constraints. Fed Chair Jerome Powell has repeatedly stated he expects high inflation will be transitory.

“There is probably going to be some pick-up in wage growth but not enough to really change what we already know about inflation over the coming months,” said James McCann, deputy chief economist at Aberdeen Standard Investments. “What the data could do is cement investors’ thinking about when the Fed might announce a tapering of asset purchases.”

The U.S. central bank last month opened talks on how to end its crisis-era massive bond-buying.

In line with recent trends, jobs gain in June were likely led by the leisure and hospitality industry. Manufacturing employment likely increased, though gains were probably curbed by the rampant worker shortages. The Institute for Supply Management reported on Thursday that its measure of factory employment contracted for the first time in seven months in June.

Construction payrolls likely rebounded after declining in May. The sector is being supported by robust demand for housing, though expensive lumber is hampering homebuilding.