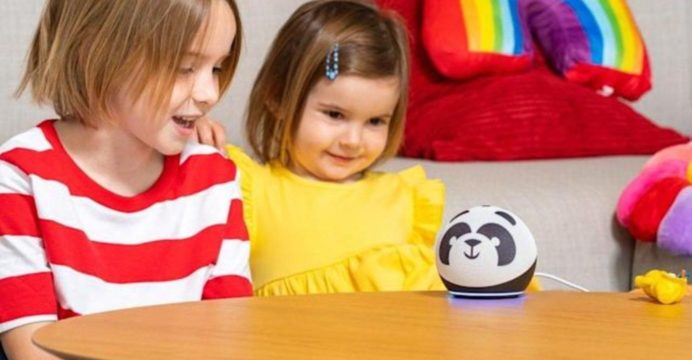 Amazon is launching a child-friendly version of its Echo Dot smart speaker in the UK, several years after it was made available in the US.

The speaker – which comes with either a panda or tiger design – is billed as a learning tool, allowing children “to have fun and learn with Alexa”.

But critics said that parents should remember that it will also be collecting data on their children. Amazon said it had imposed tight safety protocols on the device, reports BBC.

“We conduct robust testing and research and have strict measures in place for Echo Dot Kids, Amazon Kids and Amazon Kids+ that protect children and provide parents with transparency and control over the experience, creating a safe space in which kids can learn and have fun,” it told the BBC.

Of the delay in releasing the product in the UK, it said: “There are many elements and challenges that go into expanding into other countries and languages, particularly when it comes to content, services and features that are locally relevant.”

The device comes with one year’s worth of Amazon Kids, which offers Alexa-specific content such as child-friendly skills and audiobooks.

It will also have parental controls which allow adults to block things such as explicit lyrics on music streaming services, as well as set time limits to prevent children from “talking with Alexa late into the night”.

The Magic Word feature rewards children who use the word “please” with positive reinforcement.

However, privacy experts said parents should think twice before buying the device.

“You may want to take a moment to consider whether this is a piece of technology you really want in your child’s bedroom,” said digital privacy expert Attila Tomaschek, from ProPrivacy.

He added that the device would be recording a conversation it had with a child.

“The cute speaker will collect, process and analyse this data, potentially even sharing it with various third parties,” he said.

But Amazon denied that would happen: “We have built privacy and security deeply into the Alexa service. We never share voice recordings with third parties. Parents need to give permission to set up this device and can review, delete or choose not to have voice recordings saved at any time.”

In 2019, a coalition of child protection and privacy groups filed a complaint with the Federal Trade Commission, asking it to investigate the Echo Dot Kids. They said that while the device offered parental controls, it did not offer parents control over how Amazon interacts with their children’s data.