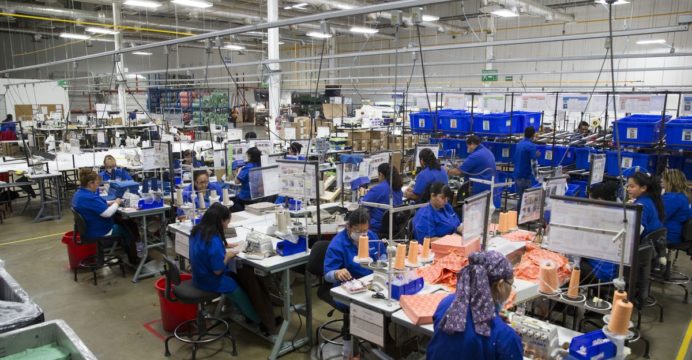 A revamped North American free trade agreement is giving factory workers new muscle to flex in Mexico, where labor unions have long been accused of shady backroom deals with employers.

It created a “rapid response labor mechanism” to consider complaints against employers suspected of violating the rules, with potential penalties including tariffs.

A special internet-based “hotline” set up by the United States allows whistleblowers to submit their labor allegations confidentially.

In May, Washington asked Mexico to investigate allegations of “serious violations” of worker rights during a union vote at a General Motors plant in Silao, in the central state of Guanajuato.

The next month the United States formally called on the Mexican government to review whether workers at the Tridonex auto parts facility in the border city of Matamoros were denied collective bargaining rights.

It is a reflection of the mood in the White House under US President Joe Biden, who ran for office as a champion of American workers.

The Democrat pledged to take action to ensure employees are protected from unfair competition from cheap labor in other countries.

The trade deal has provided an additional catalyst for change, resulting in Mexico enacting a labor reform in 2019 demanded by US Democrats as a condition to approve the USMCA.

Mexico “needed a regulation guaranteeing that unionism was not just a lie, but a real unionism,” said Leonor Quiroz, head of the ethics commission of the Coparmex business federation.

Such questionable practices are denounced by the United States as unfair competition.

In the case of the GM plant in Silao, the Mexican government suspended the vote by workers in April to approve their collective contract, after finding “serious irregularities.”

It gave the union, named Miguel Trujillo Lopez, until August 20 to repeat the vote “without coercion or intimidation.”

Israel Cervantes, a dissident union leader in Silao who lodged a complaint under the trade deal, said it was “shameful” that the government simply gave them more time.

He accuses Miguel Trujillo Lopez of prioritizing “the interests of the company, not the workers.”

Two employees at the Silao plant, who spoke to AFP anonymously, said they had been branded “troublemakers” and threatened with being “blacklisted” by other colleagues for criticizing the union.

Quiroz said the biggest challenge for the Mexican authorities is to ensure that neither workers nor companies abuse the rapid response labor mechanism.

She also noted that it can only be used in cases when non-compliance with the rules “affects trade or investment” between the parties.

Some experts are concerned about the risk of the United States using the mechanism to “bombard” Mexican factories with complaints in order to give US firms a helping hand.

Manufacturing accounts for almost 90 percent of Mexican exports, 80 percent of which go to the United States.