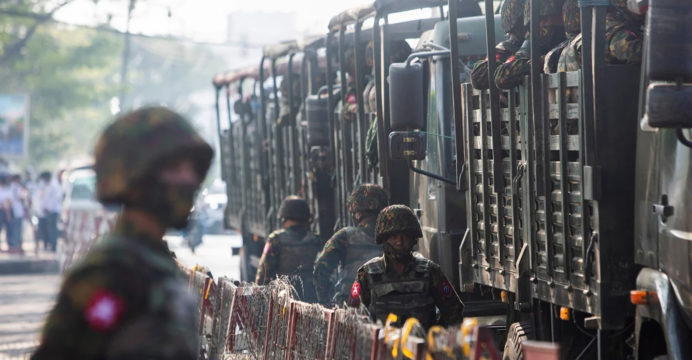 Myanmar security troops have captured a large cache of weapons on a truck bound for Mandalay this week, after arresting insurgents following a firefight in the second-biggest city, state media reported on Friday.

Since its 1 February coup against Aung San Suu Kyi’s elected government, the military has tried to stamp out dissent and has killed or arrested hundreds of protesters.

The junta’s opponents have formed militias known as People’s Defence Forces (PDF), most of which are lightly armed and have received limited training, with their attacks focused mainly in rural areas or smaller cities.

The state-run Global New Light of Myanmar newspaper carried a photograph of four arrested people in front of a weapons cache. It said more than 100 firearms, 10,000 bullets, 499 grenades, plus bombs and detonators were seized.

The report said those arrested confessed to receiving training and arms from the Kachin Independence Army (KIA), an ethnic minority army with a long history of conflict with the military.

The newspaper said security forces made the arrests after a clash with the newly formed Mandalay PDF on Tuesday in which it said eight militia were killed and eight detained.