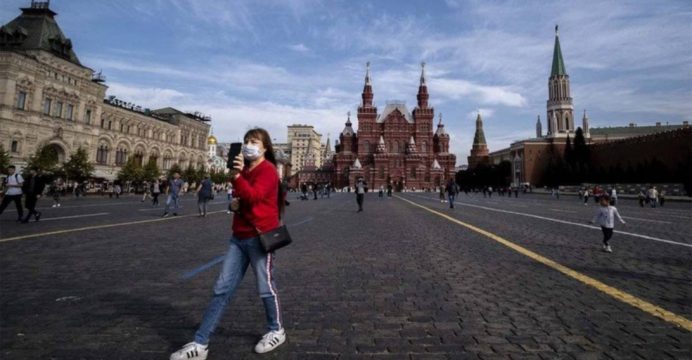 Work-from-home restrictions were reimposed in Moscow on Monday as Russia tried to contain a deadly coronavirus wave fuelled by the Delta variant, while several Asian nations also tightened curbs to contain growing outbreaks.

While many wealthy countries have brought down infections through rapid vaccinations, outbreaks are still raging from Bangladesh and Indonesia to South America, including many fuelled by the highly contagious Delta variant that was first detected in India, reports BSS.

Russia has seen an explosion of new cases in the last two weeks because of this variant, and authorities announced fresh restrictions from Monday in the capital as they pushed vaccine-sceptic citizens to get a shot.

“Nobody has invented any other solution.”

From Monday, people will have to work from home in Moscow — the epicentre of Russia’s outbreak — with exceptions for vaccinated employees.

They will also have to present a QR code to enter restaurants, certifying that they are either vaccinated, have had Covid-19 in the last six months, or have a valid negative test.

The outbreak in Russia — already one of the worst-hit nations in the world — has also caused alarm because of the ongoing Euro 2020 football tournament which has seen thousands of fans attend matches in different countries across the continent.

Saint Petersburg has already hosted six matches, and is the venue for one of the quarter-finals on Friday. Spectator numbers have been capped at half-capacity, but still upwards of 26,000 people.

Covid-19 is known to have claimed nearly four million lives worldwide since it first emerged in China in late 2019, and it is still spreading with multiple variants now in circulation.

The Delta variant is now in 85 countries and is the most contagious of any identified so far, according to the World Health Organization.

The virus also remained on the march across the Asia-Pacific region, where Bangladesh tightened its lockdown on Monday, curtailing most economic activity.

The South Asian nation, home to more than 160 million people, will shut down shops, markets, transportation and offices in stages by Thursday, and the decision sparked an exodus of tens of thousands of migrant workers from the cities.

“We did not have any choice but to leave (the capital Dhaka),” Fatema Begum, 60, told AFP while waiting for a ferry.

“During lockdown, there is no work. And if we don’t work, how do we pay rent?”

Thailand from Monday also reimposed restrictions on restaurants, construction sites and gatherings in the capital Bangkok and its suburbs because of a spike in cases.

Indonesia battled one of the worst outbreaks in Asia, reported a daily record 21,000 new cases on Sunday as fears grew about the ability of its stretched hospitals to handle the surge.

To its south, Australia was also fighting fresh outbreaks spurred by the Delta variant, with its biggest city Sydney and Darwin in the north going into lockdowns on Sunday.

The government of Africa’s worst-hit country has banned alcohol sales and all gatherings except funerals. The overnight curfew has been extended by an hour, and only takeaway is allowed at restaurants.

But the situation has dramatically improved in wealthy Western nations that were once the epicentre of the pandemic, thanks to rapid vaccination drives.

All of Italy became a mask-free, “low-risk” zone from Monday, a dramatic shift from early last year when it was a global symbol of the coronavirus crisis.

Despite the progress, however, Health Minister Roberto Speranza urged Italians to be vigilant.

“Caution and prudence is still needed, especially because of the new variants,” he wrote Saturday.

“The battle is not yet won.”