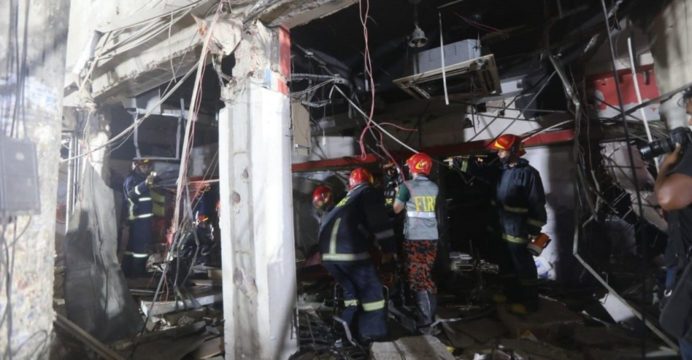 At least seven people were killed and 50 others injured in a blast that took place in the city’s Moghbazar area this evening.

“So far, we have learned that seven buildings were affected in Sharma House blast in Moghbazar. Besides, three buses were damaged. Seven people were killed,” Commissioner of Dhaka Metropolitan Police (DMP) Md Shafiqul Islam told reporters during his visit to the spot tonight.

However, Director General of the Fire Service Brigadier General Sajjad Hossain confirmed the deaths of three people to reporters at around 11pm. It has been predicted that the explosion was originated from gas blast, he said.

The blast took place in Wireless Gate area of Moghbazar at about 7:30 pm. The injured were shifted to Dhaka Medical College Hospital, Sheikh Hasina National Institute of Burn and Plastic Surgery and other city hospitals, police said.

Russell Shikder, officer of Fire Service Control Office, earlier told reporters that the explosion was took place in a multi-storey building, but the reason behind the blast could not be known immediately.

Pedestrians, bus passengers and many others were the worst victims of the explosion. Glasses of the buses and cars plying along roads near the blast were damaged.

The fire service and police of Ramna Police Station carried out drives to recover the victims of the spot. Besides, pedestrians recovered many victims form the spot and sent them to hospitals in critical conditions.

Those who were killed in the explosion could not be identified immediately.