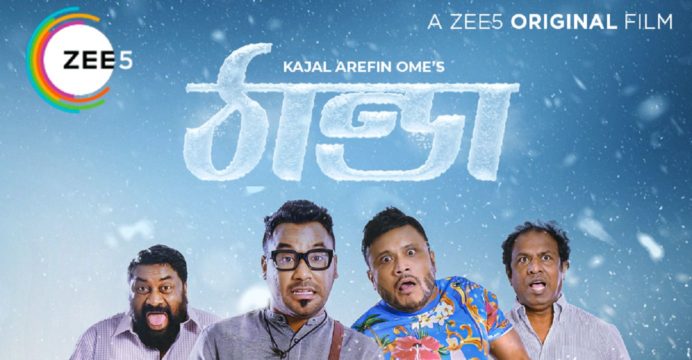 ZEE5 Global, the largest OTT platform for South Asian content, has announced the launch of its much-awaited fictional comedy film Thanda. A ZEE5 Bangladeshi Original directed by Kajal Arefin Ome, the film depicts the lives of four bachelors who share an apartment.

Thanda is a comedy of errors revolving around four key characters namely Mishu Sabbir as Mohon, Ziaul Hoque Polash as Ziku, Marzuk Russell as Sobuj and Chashi Alam as Siddique. These four bachelors share an apartment, and want to buy an air-conditioner for the scorching summer heat. They end up buying a refurbished AC which initiates a string of hilarious events, subsequently unveiling a series of crimes and criminals.

After the success of ZEE5 Global’s Mainkar Chipay, a dark thriller, recent Bangladeshi Original Contract, an underground thriller series, and romcoms Jodi Kintu Tobuo and WTFry, Thanda is all set to leave the audiences in splits.

Archana Anand, Chief Business Officer, ZEE5 Global, said, “We’re delighted to launch Thanda for our Bangla viewers across the globe. A Bangladeshi production featuring some of the finest talent, of the nation, this situational comedy film is sure to bring our viewers in Bangladesh some comic relief in true Kajal Arefin Ome style. We hope that viewers will enjoy this film and look forward to bringing them a range of diverse and gripping stories.”

The movie has been streaming on ZEE5 from June 10th, 2021 and like the other ZEE5 Bangla Originals, will be free to watch for audiences in Bangladesh.