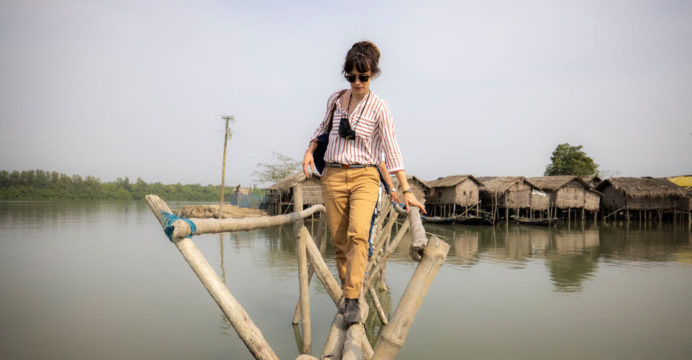 Swedish Ambassador to Bangladesh Alexandra Berg Von Linde said, “We can all be part of the solution and You,- the young people, have a tremendous role to play in raising your voice and demanding accountability for climate promises.” The Ambassador advised youths for participation in civic life and active citizenship in a youth climate dialogue marking International Ocean Day (8 June). Under the COP26 Youth Engagement Challenge Fund, YouthNet for Climate Justice, Coastal Youth Action Hub, Fridays for Future Bangladesh jointly hosted this dialogue.

In the dialogue, Swedish Ambassador underlines the important linkages between climate change and gender inequality. She said, ‘Women and girls are bearing the burden of the climate crisis and should play an integral part in designing, advocating and implementing climate-related policies.’’ With this, she emphasized women’s participation in climate negotiations, policy-making, and implementations to achieve gender justice through climate justice.

Sweedish Ambassador answered all the questions explaining the partnership policies of the Bangladesh and Sweden Government to protect biodiversity, achieving gender equality, etc, and Sweden’s pledge to be a climate-friendly nation. 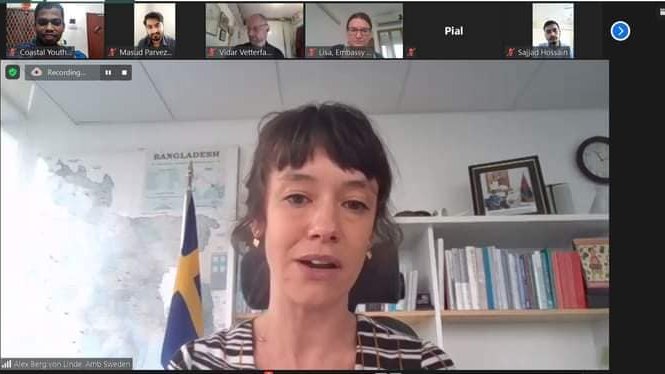 Gender Justice Activist Sheepa Hafiza who is also the Advisor of YouthNet For Climate Justice placed her suggestion praising the role of Sweden in gender equality based works here in Bangladesh and asked the Sweden Embassy to make plans to train and support the young climate activists to combat the climate crisis in intersectionality lens.

Mentioning Climate Change as a topic buried within Swedish DNA, the ambassador started her remarks with an inspirational quote of Nobel laureate Rabindranath Tagore that indicates the interconnection of nature and humans.

She quoted “ The fish in the water is silent, the animals on the earth are noisy, the bird in the air is singing. But man has in him the silence of the sea, the noise of the earth, and the music of the air.” And to me, this quote presents the question, “Are we really and truly hearing nature? Are we wise or bold enough and brave enough to hear what it is really telling us?”. In her speech, she talked about three burning issues. These are: The urgency of the Climate crisis, Taking action for climate justice and equality, And being part of the solution and the role of young people.

“We are heading towards disaster. Last year was an unprecedented year on earth. It was dominated by the Covid-19 pandemic, one of the most extreme global challenges that humanity has had to handle. And in its shadow, it was also unprecedented in another way. It was a year of extreme weather and climate disasters.’’, said Linde. She added, The cause is clear. Climate disruption caused by human activities and human decisions. The decisions that we make on a daily basis and the effects are disasters.”

Ambassador upheld one of her experiences of visiting a hanging village over water in Sundarban named Kalabagi which was devastated due to supercyclone Amphan. While talking to the local students, she asked the students about their greatest fear and they replied that their greatest fear was the next cyclone! The Ambassador said, “Imagine! Young people, the future, fearing for their life because of climate change!” What a wake-up quote!

The Ambassador also emphasized the role of youth as agents for change and innovators: You are important. Young people’s participation at the local, regional, national and global levels is central. So my advice to you: Engage! Participate! Make decision-makers aware of your challenges, needs, and ideas for improvements.”

At the end of the question-answer session, a short video was presented about the life of the climate change survivors. The engaging youth dialogue came to an end after approximately one and a half an hour with the closing remarks from the ambassador leaving a message to all participants to emphasize Reimagine, Recreate and Restoration.