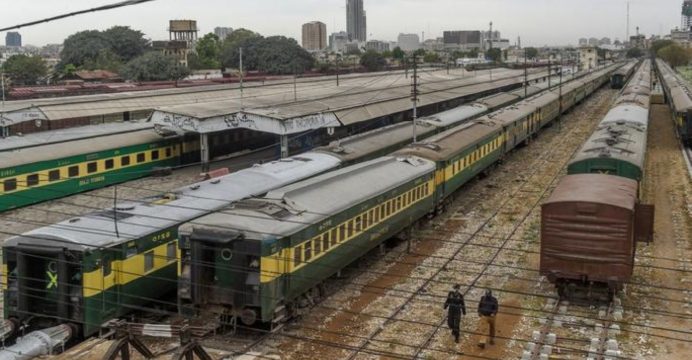 Two passenger trains have collided in southern Pakistan, killing at least 30 people and injuring dozens more. Officials said that one train derailed, causing a second train to run into it and overturn in the country’s Sindh province.

Rescue teams have brought the injured to nearby hospitals and it’s thought that several are in critical condition. Pakistan has over the past years seen a string of deadly train accidents, reports BBC.

A senior official in the Ghotki district was quoted as saying that eight carriages were destroyed and that conditions were making it hard to rescue trapped passengers.

It is not clear what caused the derailment.

Hospitals in the area have been placed on emergency alert to deal with the casualties.

Railway accidents are not uncommon in Pakistan, often caused by derailment and collisions at unmanned railway crossings.

Train travel is an extremely popular mode of travel in Pakistan, especially among middle and lower income groups, with tracks spanning the length and breadth of the country.

However, carriages are often overcrowded and many of the trains are in poor condition.

According to the authorities, the three major causes of train accidents in Pakistan are lack of track maintenance, signal issues and older engines.

Casualty figures are often high because trains are packed with far greater numbers of passengers than they were designed for.

This article has been posted by a News Hour Correspondent. For queries, please contact through [email protected]shour.media
No Comments