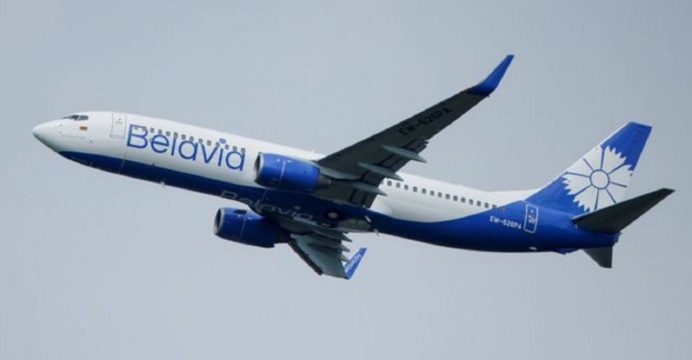 The EU banned Belarusian planes from its skies

The EU has banned Belarusian planes from its skies or accessing its airports after the forced grounding of a Ryanair flight.

European airlines are also being strongly encouraged to avoid flying over the ex-Soviet country, reports BBC.

EU states are furious at Belarus for forcing a passenger flight to land in Minsk last month and then detaining an opposition journalist who was on board.

But some airline bodies have criticised the EU for “politicising” air travel. Roman Protasevich, 26, was on a flight from Greece to Lithuania on 23 May which was rerouted over a supposed bomb threat.

Mr Protasevich and his girlfriend Sofia Sapega were arrested after the plane was grounded in the Belarusian capital Minsk.

On Friday, the journalist made a tearful TV appearance, admitting that he had organised anti-government protests.

But his family say he was coerced into making the confession, and rights groups said marks on his wrists visible in the interview suggested he had been tortured.

What does this mean for flights?
The EU’s ban, part of a wider package of sanctions against Belarus, came into effect at midnight Central European Time (22:00 UK time) on Friday.

It requires member states “to deny permission to land in, take off from or overfly their territories to any aircraft operated by Belarusian air carriers”. Enforcement of the ban falls to EU member states.

Belavia, the Belarusian national carrier, flies to some 20 airports in Europe, including Milan, Berlin, Paris, Rome and Vienna.

The European Union Aviation Safety Agency (EASA) has also issued a directive calling for EU aircraft to avoid Belarusian airspace unless in an emergency.

That could affect about 400 civilian planes that usually fly over Belarus every day, according to the European air traffic control agency Eurocontrol.

Many airlines had already announced they would not fly over the country, including Lufthansa and Air France.

The EU has already agreed a raft of economic sanctions against those involved in the incident. It is drawing up further measures targeting the regime of Belarus’s president Alexander Lukashenko.

WHAT HAS THE REACTION BEEN?

“Two wrongs do not make a right. Politics should never interfere with the safe operation of aircraft and politicians should never use aviation safety as a cover to pursue political or diplomatic agendas.”

Tensions are also growing between Belarus and its neighbour Lithuania, which has suggested Mr Lukashenko’s regime is deliberately forcing illegal migrants over its border.

Lithuanian border guards reported a sharp increase in migrants arriving from across the Belarus border on Friday. Border officials say they detained 52 migrants over the past 24 hours – more than half the total number of border crossings made from Belarus in 2020.

“It appears that Belarusian officials are potentially cooperating and participating in an organised flow of illegal migrants,” Lithuanian Interior Minister Agne Bilotaite said this week.