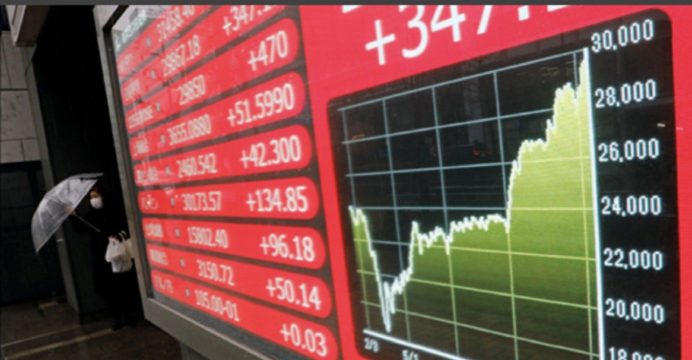 Asian markets fluctuated on Friday after another set of bumper US economic data reinforced recovery optimism but added fuel to concerns that the Federal Reserve will be forced to tighten its ultra-loose monetary policies sooner than expected.

Wary traders were also keeping tabs on China-US relations after Joe Biden almost doubled the number of firms included on an investment blacklist, in the latest move to show he has no intention of easing pressure on Beijing despite Donald Trump’s exit, reports BSS.

Closely watched figures Thursday showed the US created almost a million new private-sector jobs in May, far more than forecast, while claims for unemployment benefits last week fell below 400,000 for the first time since the pandemic started.

On top of that, a gauge of the crucial US services sector expanded for the 12th straight month and hit a record high.

The readings come after a string of strong reports on the world’s top economy and reinforced the view that the recovery is motoring along.

However, while the rebound is good news, it compounded growing concerns on trading floors that inflation will skyrocket, forcing the Fed to taper its vast bond-buying programme or even lift interest rates to prevent overheating.

The highly accommodative monetary policies of the Fed and other central banks have been a key driver of the blockbuster rally in world equities from their April 2020 troughs.

Eyes will be firmly on the release later in the day of official jobs figures, with warnings that a big miss to the upside could spark a market sell-off.

The “data was supportive for a swift labour market recovery, which threw added fuel onto brewing taper fears”, said OANDA’s Edward Moya. “If (Friday’s) nonfarm payroll report impresses, Treasury yields could surge and investors may take some risk off the table.”

However, he added: “A substantial stock market pullback seems unlikely given the looming infrastructure deal, the economy still being early in the robust part of the recovery, and too much stimulus is still in the system.”

And Ian Shepherdson of Pantheon Macroeconomics said big gains were unlikely to force any move by the bank just yet.

“May payroll growth probably was not strong enough to scare the Treasury market, or to suggest to the Fed that labour shortages are easing appreciably,” he said.

All three main indexes on Wall Street ended lower, with the Nasdaq down more than one percent owing to Tech firms being more susceptible to higher interest rates.

Asia was mixed, having swung through the morning.

Investors were treading a cautious line after Biden bulked up Washington’s blacklist of Chinese firms Americans are banned from investing in, increasing it to 59 from the 31 Trump had earmarked.

The sanctions target companies involved in Chinese surveillance technology used to “facilitate repression or serious human rights abuses”, which “undermine the security or democratic values of the United States and our allies”, the White House said.

Before the update, Beijing had already hit out at the Trump-era list and vowed to protect the rights of Chinese companies, saying the measure was “politically motivated” and “severely undermines normal market rules and order”.

Hopes for Biden’s vast infrastructure spending proposal were given a boost by a report that he had signalled a willingness to revise it down from almost $2 trillion and drop his call for a jump in corporate taxes to 28 percent from 21 percent.

The report in the Washington Post said the offer was a potential new concession in the stalled talks after Republicans baulked at the tax hike. In its place, the president was eyeing a new 15 percent minimum tax, which would take in numerous profitable firms that pay little or nothing, the paper said.