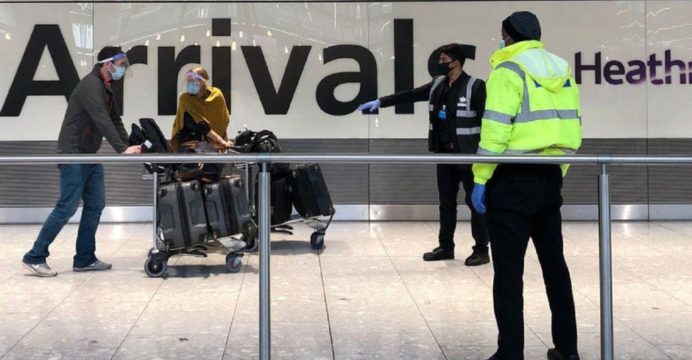 A dedicated terminal for passengers arriving in the UK from countries with a high risk of Covid has opened at Heathrow Airport.

There are 43 countries on the red list, but direct flights are permitted from only India, Pakistan and Bangladesh. Direct flights are also allowed from Kenya, but the country has currently suspended air travel to the UK.

Only British and Irish nationals or UK residents are allowed to travel from countries on the list.

But anyone who has been in a red list country in the previous 10 days, whether they took a direct flight or came via another country, is required to pay for quarantine in a hotel for 10 nights after their arrival.

However, there has been concern at reports that travellers from red list areas were mixing with other passengers in immigration halls, where they could be waiting for several hours on occasion.

It comes as a scientist advising the UK government warned of signs the country is in the early stages of a third wave of coronavirus infections.

A Heathrow Airport spokeswoman said: “Red list routes will likely be a feature of UK travel for the foreseeable future as countries vaccinate their populations at different rates.

She added that while opening the facility would be “logistically very challenging”, Heathrow hoped that doing so would enable Border Force to carry out its duties more efficiently, as passenger volumes increase in line with countries on the government’s green list.

But for now, the current red list system would continue, including mandatory negative Covid tests for all international arrivals, mandatory use of face coverings, social distancing, segregation and enhanced cleaning regimes and ventilation in immigration halls.

Heathrow added that its dedicated arrivals site would switched to Terminal 4 “as soon as operationally possible”.

A government spokeswoman emphasised the UK’s top priority was protecting the health of the public, using an enhanced borders regime to reduce the risk of new variants being transmitted.

“As we reopen international travel safely, we will maintain 100% health checks at the border and the new dedicated terminal at Heathrow for arrivals from red list countries will enable passengers to be processed as safely and as efficiently as possible, before being transferred to a managed quarantine facility,” she said.

“We continue to do all we can to smooth the process, including the roll-out of our e-gate upgrade programme during the summer and deploying additional Border Force officers.”