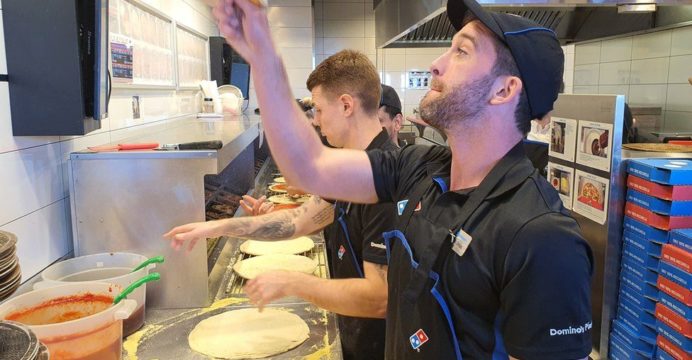 Domino’s Pizza is hiring 5,000 cooks and delivery drivers, as staff who joined during the pandemic head back to former roles. The fast-food chain said it had recruited thousands of workers in the last year to keep up with demand.

Recruits included event managers, taxi drivers and hairdressers, unable to carry out their work due to lockdowns. However, as Covid restrictions have eased, many employees are returning to their old jobs.

It comes days after reports that hospitality venues are now struggling to fill thousands of vacancies. Domino’s operations director Nicola Frampton said the group was “overwhelmed” by the response of applicants last year, reports BBC.

In March 2020, the chain created 6,000 additional roles due to an increased need for delivery drivers during the first Covid lockdown.

“I’m proud we were able to play a part by offering people the opportunity to continue working and earning when times were tough,” she said.

“But as people start to reunite, customer demand is showing no signs of slowing and so we’re now looking for 5,000 new recruits.”

The chain is taking part in the government’s Kickstart scheme, offering around 1,400 work placements for young people in stores in England, Scotland and Wales.

Kickstart recruits receive on the job training and can apply for permanent roles at the end of a six-month placement.

Last week, UK Hospitality said there was a shortfall of about 188,000 workers, with the shortage of front-of-house staff and chefs being “particularly acute”.

Uncertainty over the future stability of the industry and Brexit were cited as being the main reasons for the shortage.

Many staff have been laid off over last 14 months, as venues struggled to survive through lockdowns, despite various government support schemes.

The industry group said many overseas workers returned home last year and have not returned due to travel restrictions.

On Monday, UK Hospitality’s chief executive Kate Nicholls said venues were on a “cliff edge” if businesses were not able to fully reopen on 21 June, amid concerns about a third wave of coronavirus infections hitting the UK.

“It would be devastating for many of our members and catastrophic for those not able to open at all, [such as] nightclubs and music venues and for those with restricted opening, so wedding venues and indoor leisure,” Ms Nicholls said.

“If there is any delay it’s imperative to extend the business support schemes to protect the millions in the sector that are at risk.”