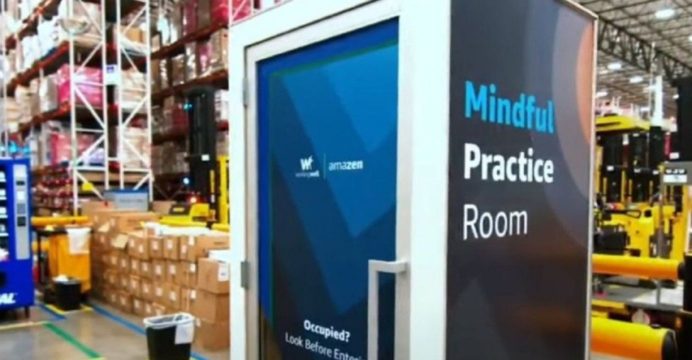 Amazon plans to put “wellness chambers” in its warehouses so that stressed workers can sit inside and watch videos about relaxation.

In a video shared on its Twitter account, Amazon said the “AmaZen” chamber would help staff focus on their mental health.

But it deleted the post after a wave of ridicule from other social media users. The US retail giant has been repeatedly criticised over working conditions in its facilities, reports BBC.

Amazon has not replied to the BBC’s request for comment.

On 17 May, the company announced a scheme called WorkingWell focusing on giving staff “physical and mental activities, wellness exercises, and healthy eating support”.

In the now-deleted Twitter video, the pod can be seen to have just enough room for a chair, small computer table against one wall, and a few small potted plants on shelves. The top panel was painted as a blue sky with clouds.

But news site Motherboard described the chamber as a “coffin-sized booth in the middle of an Amazon warehouse”.

Some viewers were quick to re-upload the video to other accounts and criticise the tech giant for what has been labelled a “crying booth” or a “dystopian” work practice.