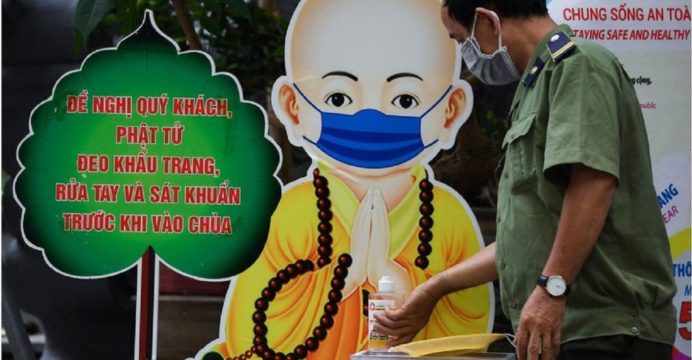 The efforts come in response to a new cluster linked to a religious mission. Vietnam has had relative success in controlling the virus but cases have been rising over the past weeks, reports BBC.

Over the weekend, officials warned of a new “very dangerous” hybrid variant discovered in the country. The government says the new variant combines features of the mutations first identified in India and the UK, and is easily transmissible by air.

Overall, the country has registered just over 7,000 infections and 47 deaths, but the latest spike accounts for more than half of the total number of cases.

The latest outbreak in Ho Chi Minh City is centred around a Christian mission which had seen at least 125 positive cases, and accounts for most of the city’s infections.

Those living in the vicinity of the cluster have already been tested and are in lockdown.

Officials now plan to test as many as 100,000 people each day, focusing on groups considered to be high risk.

In addition to testing, officials announced new social distancing measures across the city for 15 days, starting from 31 May.

Shops and restaurants are closed, and religious activities have been suspended.

“All events that gather more than 10 people in public are banned city-wide, but the city is considering to lower the number of people to just five,” the government said.

When the virus first spread beyond China in early 2020, Vietnam acted fast and decisively, closing its borders to almost all travellers except returning citizens.

It then quarantined and tested everyone who entered the country. It also conducted widespread contact-tracing and testing.

The government is under pressure to ramp up vaccinations to combat the re-emergence of the virus.

Just over one million people or 1% of the population have received at least one dose of the vaccine so far.