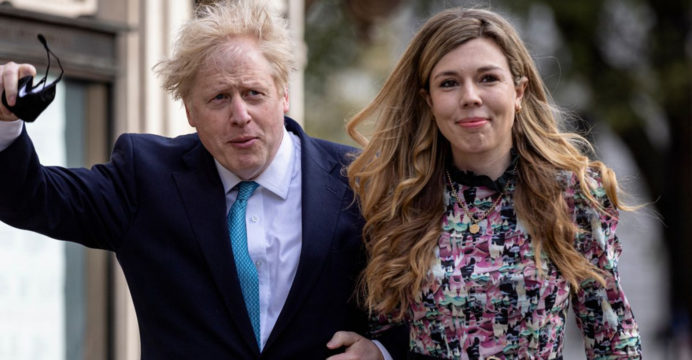 Boris Johnson secretly got married for the third time

British Prime Minister Boris Johnson has secretly married his girlfriend Carrie Symonds. The couple tied the knot at Westminster Cathedral on Saturday (May 29) local time, the BBC reported, citing several British media outlets. It is learned that only close friends and family members were present at the wedding. However, Downing Street did not comment.

The marriage of British Prime Minister Boris Johnson has been rumoured for days. This time the rumour came true. Citing various media outlets, the British media BBC reported that Prime Minister Boris Johnson had ‘secretly’ married his girlfriend Carrie Simmond. The wedding was held at Westminster Cathedral on Saturday. A total of 30 guests including close friends and family members were present at the wedding.

However, Prime Minister Boris Johnson did not officially open his mouth about this. No comment was received from Downing Street. However, soon after the news of the marriage broke, many people, including British Pensions Minister Theresa Coffey and Northern Ireland’s First Minister Arlene Foster, congratulated her on social media.

Earlier, media reported that Boris Johnson and his girlfriend Carrie Simmonds were going to get married next summer. The invitation mentioned July 30, 2022, as the wedding date. However, the details including the place of marriage were kept secret.

In 2019, Boris became the Prime Minister of the United Kingdom. Boris and Carrie have lived on Downing Street since taking over as prime minister. Boris, 56, and Carrie, 33, are the first unmarried couple living on Downing Street. They have a son. Boris’s ex-wife’s name is Marina Wheeler. They separated in September 2016. Boris married another woman before Wheeler. As such, Carrie will be Boris’ third wife.