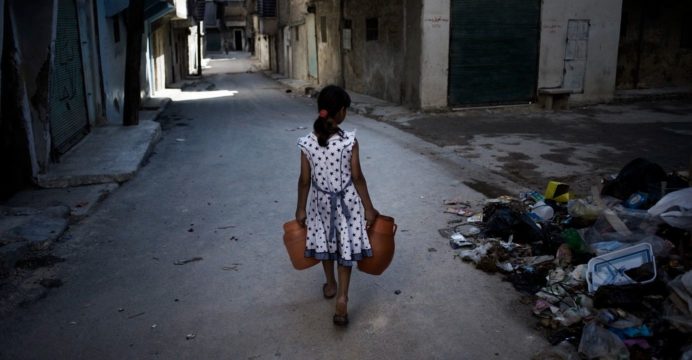 Protecting water and sanitation services is critical to the survival of millions of children. In fragile countries, children under the age of five are 20 times more likely to die due to diarrheal diseases than to violence, and children in extremely fragile contexts are often more than eight times worse off across water, sanitation and hygiene indicators than children born into stable and protected environments.

“Access to water is a means of survival that must never be used as a tactic of war,” said UNICEF Director of Emergency Programmes Manuel Fontaine. “Attacks on water and sanitation infrastructure are attacks on children. When the flow of water stops, diseases like cholera and diarrhoea can spread like wildfire, often with fatal consequences. Hospitals cannot function, and rates of malnutrition and wasting increase. Children and families are often forced out in search of water, exposing them, particularly girls, to an increased risk of harm and violence.”

The report examines the immense impact on children and families when water and sanitation infrastructure are attacked, damaged or destroyed, controlled or otherwise restricted in countries besieged by armed conflict. It highlights that children’s access to water has been threatened in nearly every conflict-related emergency where UNICEF is responding.

For example, Eastern Ukraine has experienced four attacks on water infrastructure since the start of the year, with 380 attacks recorded since 2017. Around 3.2 million people need water and sanitation services.

Entering its sixth year of protracted conflict, Yemen saw 122 airstrikes on water infrastructure between March 2015 to February 2021. Around 15.4 million people urgently need safe water and sanitation as the cholera epidemic continues to make thousands of children ill every week.

Since 2019, the State of Palestine has seen 95 attacks against 142 water and sanitation infrastructures. More than 1.6 million people live without access to these basic services.

The decades-long fragility of Iraq has resulted in massive damage to the water and sanitation infrastructure, leaving 1.85 million people cut off from regular access to lifesaving drinking water and safe sanitation.

In Syria, around 12.2 million people need access to water and sanitation due to heavy infrastructure damage over the past 10 years of conflict.

To urgently protect children in conflict and guarantee access to safe and sufficient water, UNICEF is calling for: