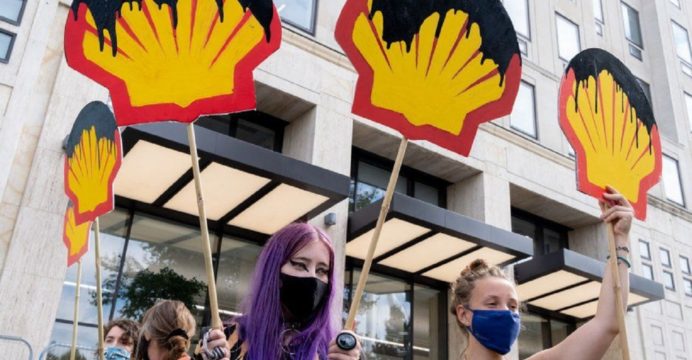 A court in the Netherlands has ruled in a landmark case that the oil giant Shell must reduce its emissions.

Dutch media reported that this was the first time an oil company had been held liable for climate change.

Environmental group Friends of the Earth brought the case to court in 2019, alongside six other bodies and more than 17,000 Dutch citizens.

It sought to force Shell to cut emissions in line with the 2015 Paris climate accords. On Wednesday the civil court ruled that by 2030, Shell must cut its CO2 emissions by 45% compared to 2019 levels, reports BBC.

It said the oil giant is responsible for CO2 emissions of the Shell group and its suppliers.

Under the terms of the Paris Agreement, nearly 200 nations agreed to keep global temperatures “well below” 2C above pre-industrial levels.

The legally-binding treaty came into force on 4 November 2016. The US withdrew under former President Donald Trump but has since rejoined under President Joe Biden.

A number of groups around the world are now trying to force companies and governments to comply with the accords through the courts.

Shell has previously said it wants net zero emissions for itself and from products used by its customers by 2050.

In December its defence lawyers told the court the company was already taking “serious steps” to move away from fossil fuels, and said there was no legal basis for the case.

Shell – full name Royal Dutch Shell – is a British-Dutch multinational which has its headquarters in The Hague, allowing Friends of the Earth to bring the case to a Dutch court.

Earlier this year a Dutch court ruled that Shell is responsible for damage caused by leaks in the Niger Delta, and ordered the company to pay compensation to farmers there.

Shell, however, has said the leaks were the result of “sabotage”.