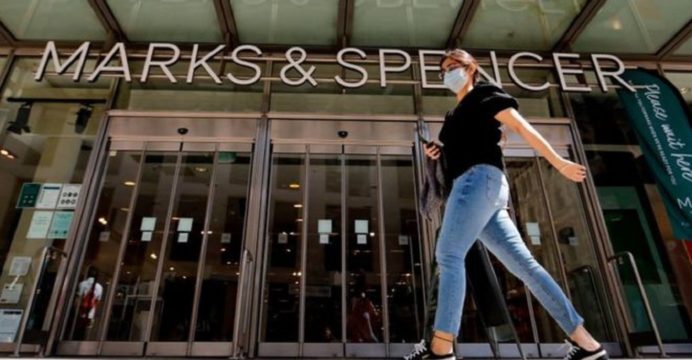 Marks & Spencer to close 30 shops over the next 10 years

Marks & Spencer has said it plans to close another 30 shops over the next 10 years as part of its turnaround plan.

M&S has already closed or relocated 59 main stores, as well as cutting 7,000 jobs across stores and management. The chain has reported big losses for last year as the pandemic took its toll on clothing sales.

But food sales were up thanks to its Ocado tie-up, contributing to “a resilient financial performance in a year of disruption”. M&S made a pre-tax loss of £201.2m in the 52 weeks to 27 March, down from a £67.2m profit in the previous year, reports BBC.

The High Street stalwart currently has 254 full-line stores, selling clothing, homewares and food. It says that a number of them are in long-term decline and cannot justify future investment.

About 30 stores will gradually close over the next decade, while another 80 will be moved to better locations or merged with nearby shops.

The group will open 17 new or expanded main stores over the next two years, including a number of former Debenhams sites.

“We are committed to stores and believe they can be a true source of competitive advantage,” chief executive Steve Rowe told investors and journalists on a conference call.

Clothing woes
After accounting for one-off restructuring costs, the business made a profit of £41.6m, but this was still down almost 90% on the previous year.

The M&S losses were mainly due to the performance of its clothing division, which suffered as non-essential retail was closed during lockdown.

The 137-year-old chain said clothing and homeware sales had fallen by 31.5%, reflecting the “heavy impact” of lockdowns on stores.

“In most of this time, our operations have been severely constrained by the change in day-to-day living, the effects of social distancing and partial or full closure of large parts of our store estate,” M&S said.

“This has resulted in substantial changes to the mix of products customers have bought and a wide divergence of store formats and channels.”

However, M&S said clothing and home sales had been growing since reopening.

It said food delivered “strong underlying like-for-like growth” of 6.9%, after adjusting for the closure of hospitality and the adverse impact on franchise sales.

“In a year like no other, we have delivered a resilient trading performance,” said chief executive Steve Rowe.

“In addition, by going further and faster in our transformation through the Never the Same Again programme, we moved beyond fixing the basics to forge a reshaped M&S.

“With the right team in place to accelerate change in the trading businesses and build a trajectory for future growth, we now have a clear line of sight on the path to make M&S special again. The transformation has moved to the next phase.”