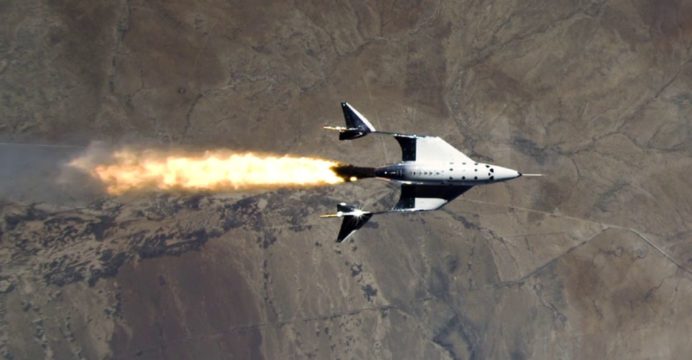 The Unity vehicle, with pilots Dave Mackay and CJ Sturckow at the controls, powered to a height of 89km (55 miles), and then glided back down to Earth, reports BBC.

Sir Richard has some 600 paying customers – including movie and music stars – waiting to take the same ride.

But they’ll only get their chance once Unity is fully licensed.

That ought, finally, to happen by the year’s end.

The licensing process is the responsibility of the US Federal Aviation Administration (FAA), who will now receive operational and performance data from Saturday’s sortie high above the New Mexico desert.

Officials will want to see, for example, that an electronic interference issue that aborted a previous flight attempt in December, has been corrected. On the evidence of Saturday’s successful flight, it has been.

Unity was carried to 13km (44,000ft) in altitude by its “mother” aircraft, Eve, before being released to ignite its rocket motor.

The vehicle then climbed rapidly to the edge of space, achieving a speed three times that of sound (Mach 3) along the way.

It was the sixth time Unity had conducted a powered ascent in its five-year test programme, although this one was particularly noteworthy because it was the first such demonstration to run out of what will be its operational home – the purpose-built commercial hub known as Spaceport America.

“It was a beautifully elegant experience,” said Sir Richard, who was watching from the ground.

“We had the backdrop of New Mexico, the mountains with the Sun coming up; we could see the spaceship clearly from the ground just going straight up. And, yeah, burning, burning, burning, until it finally disappeared into space,” the businessman told BBC News.

The next flight should see four of Sir Richard’s Virgin Galactic employees join the pilots – to get a sense of the experience that future ticketed customers will enjoy. The identity of this quartet has yet to be revealed, even within the company itself.

The flight after that would see Sir Richard himself go to the edge of space – as a statement of readiness for commercial service.

And it’s then on the subsequent outing that the company is expected to start earning revenues from carrying passengers.

That’s a mission that has been purchased by the Italian Air Force, which is going to put several payload specialists aboard Unity to supervise a number of microgravity experiments.

It’s been a long road for Virgin Galactic’s engineers to get the system to where they want it, with progress over the past year stymied in part by the Covid crisis.

But CEO Michael Colglazie said the project was now firmly on track, especially with respect to FAA licensing.

“It was such a perfect flight. We’ll get the data off the ship and give it to the FAA. That’ll be our homework turned in. We believe we’ve now collected everything we need for the final points on our commercial licence,” he explained.

The move to commercial service can’t come soon enough. Space tourism is a sector being rekindled after a decade’s hiatus, and it’s about to get very competitive.

Throughout the 2000s, seven wealthy individuals paid to visit the International Space Station (ISS). But this adventurism, organised under the patronage of the Russian space agency, ceased in 2009.

The Russians, too, are reprising their commercial flights to the ISS, and there are even those who want to launch private space stations for people to visit. Among these is Axiom, a company started by a former Nasa ISS programme manager.

Sir Richard said he was busy getting himself ready for his own spaceflight later this year.

“I’ll have a whole day of training tomorrow. And, oh my god, I’m looking forward to it. It’s ridiculously exciting. Our chief astronaut Dave Mackay just turned to me and said, ‘Richard, you’re gonna love it’,” he told BBC News.