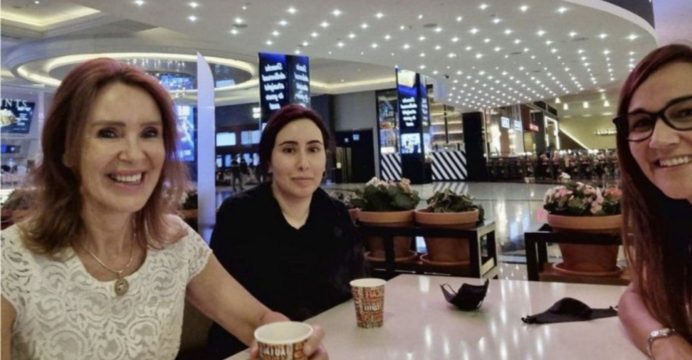 A photograph posted this week on two public Instagram accounts purports to show Princess Latifa, the daughter of the ruler of Dubai, who has not been seen or heard from in months.

In mid-February, BBC Panorama broadcast secret video testimony from her in which she said she was being held as a hostage and feared for her life, reports BBC.

The BBC is unable to verify the photo, and no further information has been provided.

However, a friend of Latifa’s confirmed that it is the princess in the picture.

The BBC understands that the appearance of the image is not random or accidental, but is related to other undisclosed developments.

In a statement, David Haigh, co-founder of the Free Latifa campaign group, said: “We confirm that there have been several potentially significant and positive developments in the campaign. We do not intend to comment further at this stage, a further statement will be issued at the appropriate time.”

The London embassy of the United Arab Emirates (UAE) did not respond to a BBC request for comment.

The UN declined to comment on the photograph but has told the BBC that it awaits “convincing proof of life in the case of Latifa”, which the UAE has said it will provide.

WHAT DOES THE PHOTO SHOW?

The photo appears to show Princess Latifa in a Dubai shopping mall, the Mall of the Emirates (MoE), sitting with two other women. Friends of Latifa have told the BBC that they recognise both of the other women, and that Latifa is acquainted with them.

It was uploaded to Instagram, which does not include metadata that would show the date and time, as well as the precise time and location where the photo was taken.

The image is reversed. However, it shows a cinema advertising the film Demon Slayer: Mugen Train, which was released in the United Arab Emirates on 13 May 2021.

The image was posted on Instagram on Thursday of this week on the accounts of both of the other women in the picture, one of them adding the comment, “Lovely evening at MoE with friends.” 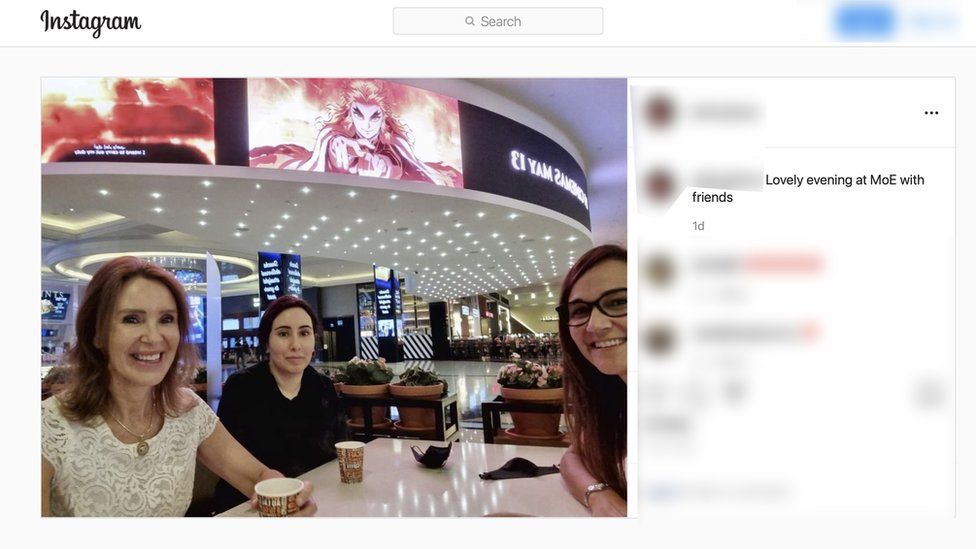 Neither woman responded to the BBC’s request for comment on Latifa’s condition or information about when the photograph was taken.

“Assuming that the photo is genuine, it shows proof of life, which is something, but nothing about the conditions of her confinement or her freedom,” Kenneth Roth of the advocacy group Human Rights Watch told the BBC.

The image (shown below) came with the caption: “Lovely food at Bice Mare with Latifa earlier.”

Bice Mare is a restaurant in Dubai’s Burj Khalifa. No further details were given.

There has been no comment from the UAE. In February, it told the BBC that Latifa was being “cared for at home”.

“She continues to improve and we are hopeful she will return to public life at the appropriate time,” a statement said.

WHAT HAPPENED TO LATIFA?

Latifa, one of the 25 children of Sheikh Mohammed bin Rashid al Maktoum, attempted to escape from Dubai in February 2018.

In a video recorded shortly before she left, she explained that her life was heavily constricted. “I haven’t left the country since 2000. I’ve been asking a lot to just go travelling, to study, to do anything normal. They don’t let me,” she said.

But the escape went wrong: eight days into a daring sea journey across the Indian Ocean, they were caught by commandoes who forcibly removed Latifa and returned her to Dubai.

Her father later said that he considered this a “rescue mission”.

In February 2021, BBC Panorama broadcast videos secretly recorded by Princess Latifa and communicated to friends abroad, in which she describes her capture and her imprisonment after her return to Dubai.

She said she was being held alone without access to medical or legal help in a villa with windows and doors barred shut, and guarded by police.