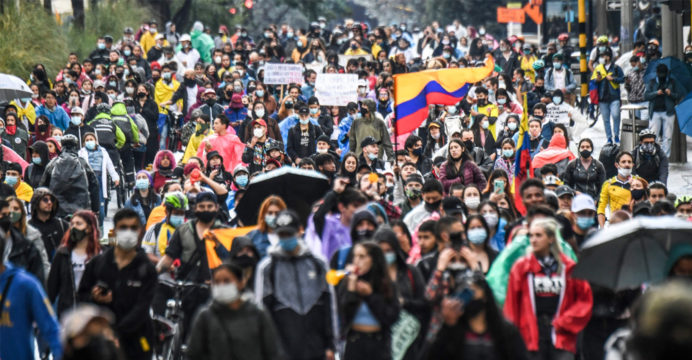 Colombians protest ahead of talks with government

Colombians took to the streets Wednesday, on the eve of talks with the government, in a third week of demonstrations that have been marked by police abuses and dozens of civilian deaths.

The talks, due to resume Thursday, have stumbled over the government’s reticence to renounce violence by the police, and on Wednesday Nobel Peace laureate Juan Manuel Santos, a former Colombian president, urged incumbent Ivan Duque to recognize the misuse of force.

Thousands of people mobilized in Bogota, Cali, Medellin and other cities, with no early reports of clashes.

At least 42 people, mostly civilians, have died in clashes with security forces since demonstrations started on April 28, according to official figures, and more than 1,700 have been injured.

“We need more gestures, we need more empathy and more humility, and for the state to recognize: ‘look, we committed abuses,’” Santos told W Radio.

Such a move would go a long way, he said, towards breaking a deadlock with demonstrators who initially took to the streets against a proposed tax reform.