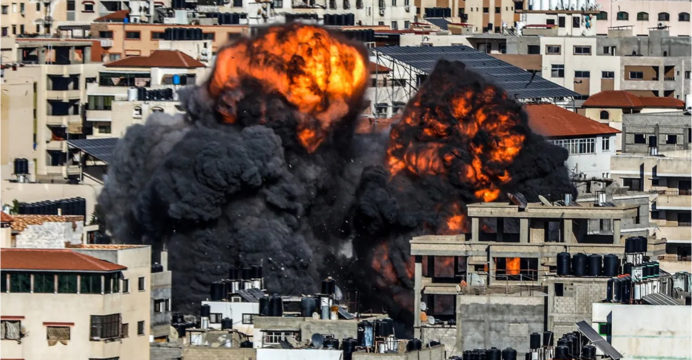 Biden calls for ‘de-escalation’ as Israel and Gaza trade fire

US President Joe Biden called for a “significant de-escalation” in Israel’s conflict with Gaza’s armed groups ahead of a diplomatic push Thursday to stem the violence, as the sides traded further fire.

Israeli fighter jets hit the residences of at least six Hamas leaders, according to an army statement, which said “military infrastructure” was stored at each site.

The persistent unrest came after a strong call from Washington on Wednesday for an easing of the hostilities that erupted on May 10.

“The president conveyed to the prime minister (Benjamin Netanyahu) that he expected a significant de-escalation today on the path to a ceasefire,” the White House said after a fourth phone call in a little over a week.

Germany’s top diplomat was due for talks in Israel on Thursday, in the latest effort to broker a ceasefire.

Over 10 days, Israeli strikes have killed 227 Palestinians, according to the Gaza health ministry, while Palestinian rocket fire has claimed 12 lives in Israel, according to Israeli police.

An Israeli military official, speaking on condition of anonymity, said Israel was assessing at what stage it may stop its military campaign.

“We are looking at when is the right moment for a ceasefire,” said the source.

Netanyahu earlier issued a tough threat against Hamas, who Israel says is responsible for the estimated 4,000 rockets fired at the Jewish state since May 10.