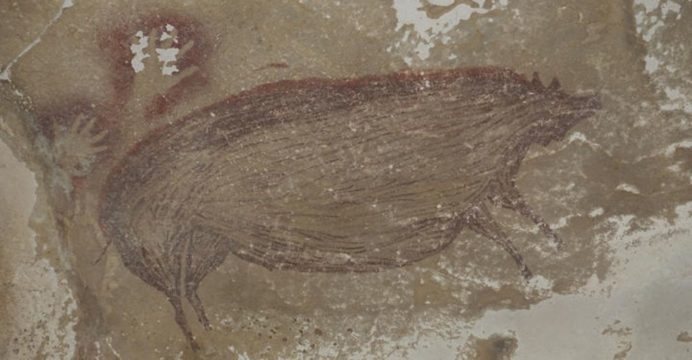 Indonesian rock art is decaying at an alarming rate due to the effects of climate change, researchers said.

This includes a picture of a wild pig drawn 45,500 years ago on the island of Sulawesi – said to be the world’s oldest animal cave painting.

Other cave motifs in the region depicting hunting scenes and supernatural beings have also crumbled faster as temperatures increase. The findings signal that more needs to be done to preserve the priceless art, reports BBC.

“[These pieces of art are] disappearing before our eyes,” study lead Dr Jillian Huntley, from the Griffith Centre for Social and Cultural Research, said in a press statement.

In a study published in Scientific Reports last week, a team of Australian and Indonesian researchers found that increased temperatures and other extreme weather patterns – such as consecutive dry days and heavy monsoons – have accelerated the build-up of salts within the cave systems housing the rock art.

The salts swell and shrink as the environment heats and cools. On hot days, geological salts can grow to more than three times their initial size, the team wrote.

These salt crystals, growing on top of and behind the rock art, can then cause parts of the pictures to flake off the cave walls.

Dr Huntley added that she believed the “degradation of this incredible rock art is set to worsen the higher global temperatures climb.”

“I was gobsmacked by how prevalent the destructive salt crystals and their chemistry were on the rock art panels, some of which we know to be more than 40,000 years old,” she said.

“We urgently need further rock art and conservation research to have the best chance of preserving the Pleistocene cave paintings of Indonesia.”

The life-sized picture of the Sulawesi warty pig appears to be part of a narrative scene found in the Leang Tedongnge cave in a remote valley on the island of Sulawesi.

It provides the earliest evidence of human settlement of the region. The painting is the world’s oldest art depicting a figure, but it is not the oldest human-produced art. In South Africa, a hashtag-like doodle created 73,000 years ago is believed to be the oldest known drawing.