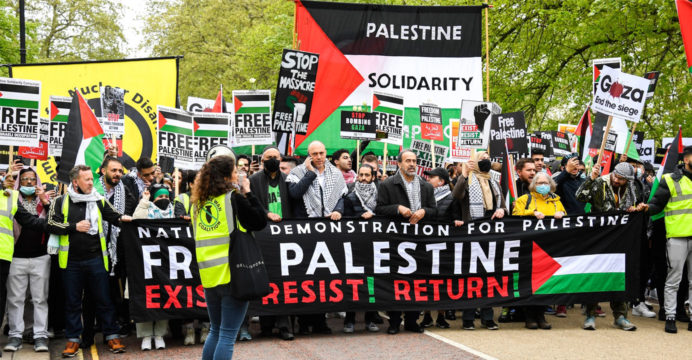 Large demonstrations have taken place in the US capital, Washington DC, demanding an end to Israeli “genocide” in Palestine. Thousands of Palestinian immigrants, other Arab immigrants and anti-war Americans took part in the protest on Saturday (May 15th) at local time.

According to Al Jazeera, the protesters displayed various anti-war banners, placards, and festoons on behalf of the Palestinians. Meanwhile, the placard “Wanted for Genocide” with a picture of Israeli Prime Minister Netanyahu caught everyone’s attention.

Protesters also carried placards reading “World Stand with Palestine”, “How Do You Feel” with pictures of Israeli atrocities.

The protesters said they hoped Biden’s administration would play a role in dealing with the conflict and put pressure on Israel. But they are as frustrated as ever that Biden’s policy is no different from that of the Trump administration or other administrations over the past few years.

Al Jazeera reports that large demonstrations against Israeli atrocities have taken place not only in Washington DC, but also in Chicago, Colorado and New York. Where thousands of people participate.