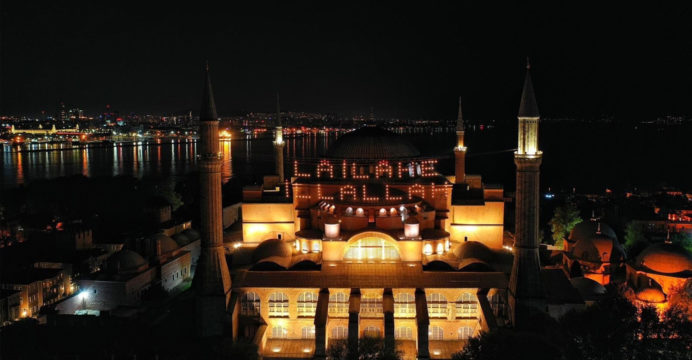 Aya Sophia, a spectacular installation in Istanbul, Turkey, has been decorated in colorful attire on the occasion of the holy Lailatul Qadr. This is the first time in 86 years that Lailatul Qadr has been celebrated there.

This year, under the management of the local government in Istanbul, special electric light beams have been added to the Aya Sophia minarets, and the lanterns have been inscribed with ‘La ilaha illallahu’. Worship is held there on Saturday (May 8).

After 86 long years, Aya Sophia Mosque was turned into a mosque in July last year. Lailatul Qadr was celebrated there for the first time after it was converted into a mosque.

‘Aya Sophia’ is one of the oldest aesthetic architectural art in the world. The 1,500-year-old monastery in Istanbul, Turkey, has been one of the major churches of Christianity for nearly a thousand years since the time of the Roman-Byzantine emperors but has been a Muslim mosque for five hundred years in the Ottoman Empire. It was a museum from 1935 to July 23, 2020. From July 24, 2020, it was changed to a mosque through Friday prayers.