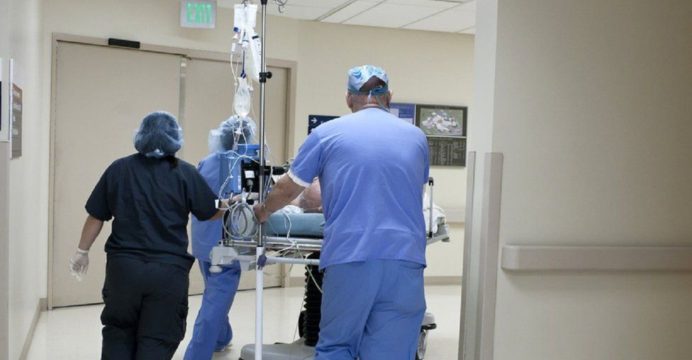 People diagnosed with Covid-19 in the previous six months were more likely to develop depression, dementia, psychosis and stroke, researchers have found.

A third of those with a previous Covid infection went on to develop or have a relapse of a psychological or neurological condition.

But those admitted to hospital or in intensive care had an even higher risk. The study authors pointed to both the effects of stress, and the virus having a direct impact on the brain, reports BBC.

UK scientists looked at the electronic medical records of more than half a million patients in the US, and their chances of developing one of 14 common psychological or neurological conditions, including:

Anxiety and mood disorders were the most common diagnosis among those with Covid, and these were more likely to be down to the stress of the experience of being very ill or taken to hospital, the researchers explained.

Conditions like stroke and dementia were more likely to be down to the biological impacts of the virus itself, or of the body’s reaction to infection in general.

Covid-19 was not associated with an increased risk of Parkinson’s or Guillain-Barré syndrome (a risk from flu).

The study, published in the Lancet Psychiatry journal, was observational. So the researchers couldn’t say whether Covid had caused any of the diagnoses – and some people would have had a stroke or depression in the next six months regardless.

But by comparing a group of people who had had Covid-19 with two groups – with flu and with other respiratory infections respectively – the researchers at the University of Oxford concluded Covid was associated with more subsequent brain conditions than other respiratory illnesses.

The participants were matched by age, sex, ethnicity and health conditions, to make them as comparable as possible.

Sufferers were 16% more likely to develop a psychological or neurological disorder after Covid than after other respiratory infections, and 44% more likely than people recovering from flu.

On top of this, the more severely ill with Covid the patient had been, the more likely they were to receive a subsequent mental health or brain disorder diagnosis

Mood, anxiety or psychotic disorders affected 24% of all patients but this rose to 25% in those admitted to hospital, 28% in people who were in intensive care and 36% in people who experienced delirium while ill.

Strokes affected 2% of all Covid patients, rising to 7% of those admitted to ICU and 9% of those who had delirium.

And dementia was diagnosed in 0.7% of all Covid patients, but 5% of those who’d experienced delirium as a symptom.

Dr Sara Imarisio, head of research at Alzheimer’s Research UK, said: “Previous studies have highlighted that people with dementia are at higher risk of developing severe Covid-19. This new study investigates whether this relationship may also hold in the other direction.

“The study doesn’t focus on the cause of this relationship and it is important that researchers get to the bottom of what underlies these findings.”

There is evidence the virus does enter the brain and cause direct damage, neurology professor Masud Husain at the University of Oxford, explained.

It can have other indirect effects, for example by affecting blood clotting which can lead to strokes. And the general inflammation which happens in the body as it responds to infection can affect the brain.

For just over a third of people developing one or more of these conditions, it was their first diagnosis.

But even where it was a recurrence of a pre-existing problem, researchers said this did not rule out the possibility that Covid had caused the episode of illness.

Prof Dame Til Wykes, at the Institute of Psychiatry, Psychology and Neuroscience, King’s College London, said: “The study confirms our suspicions that a Covid-19 diagnosis is not just related to respiratory symptoms, it is also related to psychiatric and neurological problems.

“Looking over six months after diagnosis has demonstrated that the “after-effects” can appear much later than expected – something that is no surprise to those suffering from Long Covid.