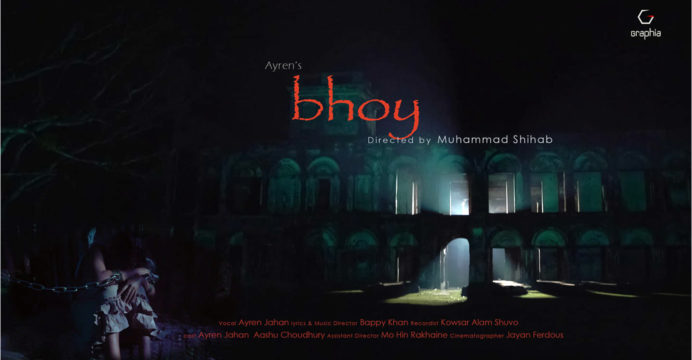 Bangla song “bhoy” published on YouTube with all the dark feelings

Ayren Jahan Bindu’s new song ‘Bhoy’ (Fear) has recently been released on Graphia‘s YouTube channel. Muhammad Shihab is the creator of this dark music video, Bappi Khan arranged the lyrics and music of the song.

In the last few years, Ayren Jahan’s name has been seen in multiple fields of entertainment including TV drama and modeling. In her professional life, she is a doctor but currently trying to establish herself as a full-fledged actress. She is busy working on multiple web series as well. But beyond that, her new role as a singer has revealed recently.

Apart from giving voice in the song, this talented young soul has also been seen as a model with Ashu Chowdhury Ash in this song.

Ayren Jahan Bindu was overwhelmed by the song and said, ‘Even though it is a hobby, we have tried our best to give the audience something good. I hope everyone will like this different rock song ‘.

This songs production company Graphia started with the vision of integrating ideas into creative media content, regardless of platform. Bearing no constraints on perspectives and interpretations had allowed Graphia to make anything possible. Apart from having its own facility, Graphia has carved an image for itself, gradually taking a position as a media agency covering peoples needs.