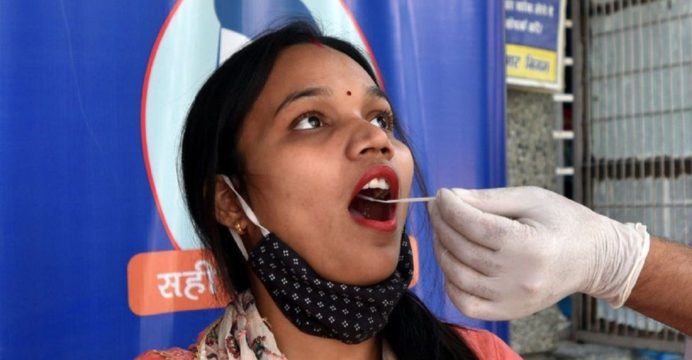 The western state of Maharashtra accounts for nearly 70% of the national caseload, reports BBC.

Experts say that poor adherence to safety protocols is driving the surge. Some say new variants could also be a reason, but it isn’t established yet.

But the last few weeks have seen a sharp uptick. While Maharashtra leads the table, several other states – Kerala, Punjab, Karnataka, Gujarat, Tamil Nadu, Haryana and Madhya Pradesh – are also seeing a rise in cases.

In Mumbai, Maharashtra’s capital, officials have said they will roll out random rapid tests in crowded areas such as shopping centres and train stations.

Prominent critical care expert Dr A Fathahudeen, who has treated thousands of Covid patients, says the rise is not surprising.

He adds that “a false notion of optimism” swept the country when the caseload was decreasing at the start of the year.

“People had falsely assumed that India had reached the threshold of herd immunity but that is not the case,” he says.

Dr Fathahudeen also believes the start of the vaccination drive contributed to this because people “equated the arrival of the vaccine with normal times”.

“The situation is far from normal, in fact it’s alarming at the moment. The vaccination drive has to be scaled up massively, and test and trace and isolation protocols have to be strengthened across the country.”

More than 40 million people in India have received at least one dose of a coronavirus vaccine so far, but that’s less than 4% of the country’s population.

The government aims to cover 250 million “priority people” by the end of July.

Although the pace of vaccination has picked up – more than three million people were administered doses in a single day – experts warn that the target could be missed unless the drive is scaled up further.