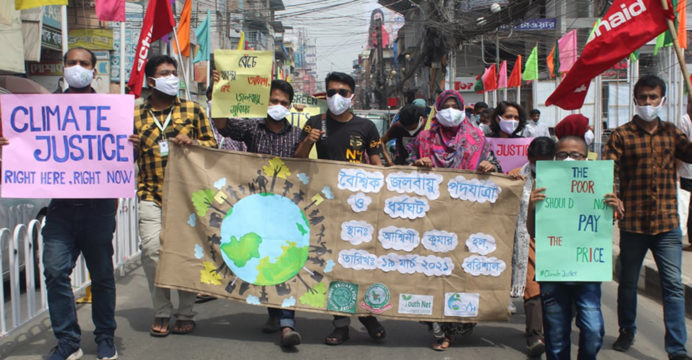 Young people on the streets demanding justice for Barishal climate

The youths have gone on a climate strike in Barisal in solidarity with the ‘Global Climate Strike’ program, which is agitating against global climate change.

Taking part in the program, climate activists demanded the implementation of the Paris Agreement, including putting pressure on developing countries to limit global warming to 1.5 degrees Celsius ahead of the upcoming UN Climate Conference COP-26 and the Youth Conference.

The procession started from Barisal Central Shaheed Minar at 10 am on Friday (March 19) and ended in front of Ashwini Kumar Hall. Half a hundred youths carrying placards with various demands under the banner of Fridays for the Future Bangladesh movement took part in the program and called on the world leaders to take urgent action instead of a bouquet of promises. The event was jointly organized by the environmental organization Youthnet for Climate Justice, the Symbolic Youth Parliament, and the Coastal Youth Action Hub.

Chairperson of Pratik Youth Parliament Aminul Islam (Firoz Mostafa), Program Manager Mayuri Akhter Tumpa, Coordinator of Youthnet for Climate Justice Sohanur Rahman, President of Aranyak Kathak Biswas Joy spoke on climate blockade. Greta Thanberg, a Swedish schoolgirl, stood in front of the Swedish parliament with a placard in her hand. It read, “School Strike for Climate.” School students from around the world went on strike in solidarity with his initiative.