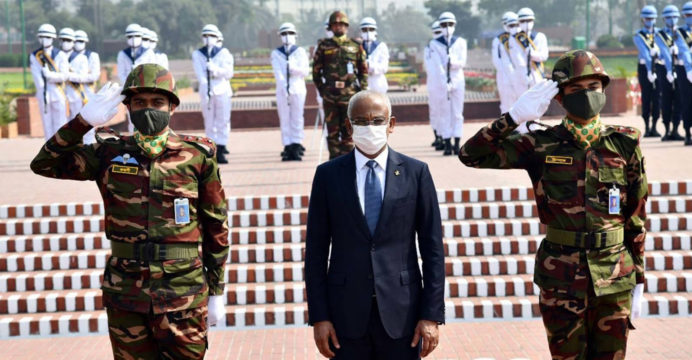 Maldivian President Ibrahim Mohamed Solih today described Father of the Nation Bangabandhu Sheikh Mujibur Rahman as one of the giants of South Asian history, saying he secured a permanent room in the hearts of all who aspires for democracy and freedom.

“He (Bangabandhu) is one of the giants of South Asian history, whose actions were pivotal in securing an independent destiny for the people of Bangladesh,” Solih said as he joined the grand opening of Bangladesh founder’s birth centenary and country’s Independence golden jubilee celebrations at the National Parade Ground.

Solih said the Bangladesh founder would “always have an honored place in the hearts of those who yearn for democracy and freedom”.

The Maldivian president who joined as the first of five South Asian leaders to join the 10-day celebration recalled that throughout his life Bangabandhu was an “uncompromising advocate” of democracy and political freedoms.

The Maldivian leader particularly noted that Bangabandhu’s March 7, 1971 speech as a testament to his “skill and monumental historic standing”, that “effectively declared” Bangladesh’s independence for which UNESCO recorded it as the Memory of the World Register as documentary heritage.