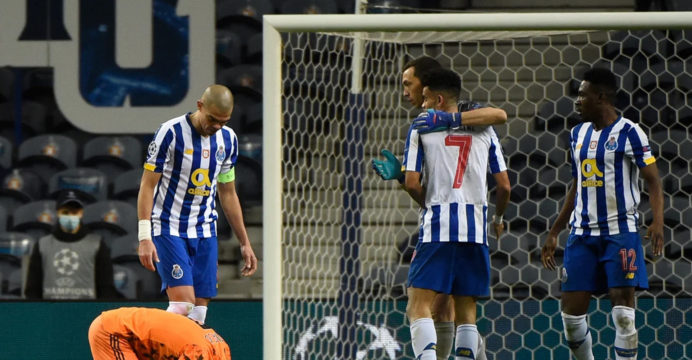 Ronaldo silenced as Porto knock Juventus out of Champions League

Cristiano Ronaldo’s Juventus crashed out of the Champions League in the last 16 for the second year running on Tuesday, losing to 10-man Porto on away goals despite winning the second leg 3-2 in Turin, reports bss.

Sergio Oliveira’s extra-time free-kick sent twice former winners Porto through to the quarter-finals as the tie finished 4-4 on aggregate.

Leading 2-1 from the first leg in Portugal, Oliveira’s first-half penalty increased Porto’s advantage but Juventus leveled the tie through two goals from Federico Chiesa, which came either side of Porto striker Mehdi Taremi’s red card.

Oliveira then rifled home a low free-kick on 115 minutes, which passed through the legs of Ronaldo, with Adrien Rabiot’s header in reply coming in vain for Juventus.

“When you make four big errors over two legs in the Champions League last 16, you can get eliminated,” said Juventus coach Andrea Pirlo.

“It will take a few days to wipe this game from our minds, but then we must play every game with the right attitude, realise we’re still only in March and have time to climb the Serie A table.”

Juventus had been counting on Portuguese striker Ronaldo, the competition’s record goalscorer, and in-form Spaniard Alvaro Morata, who had scored six goals in the competition this season, to pull them through.