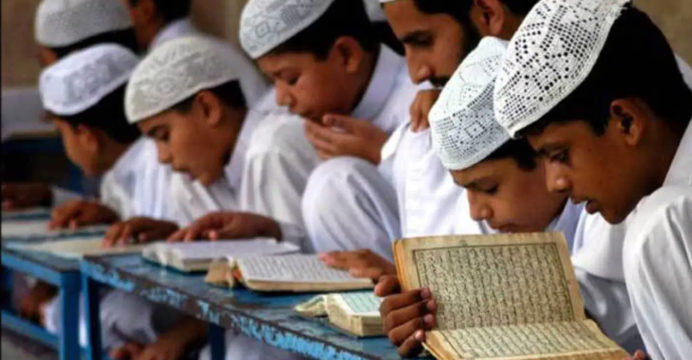 Under India’s new national education policy, Hindu scriptures such as the Gita, the Vedas or the Ramayana are being included in the curriculum in hundreds of madrassas across the country.

An agency under the country’s education ministry says a new subject called Ancient Indian Knowledge and Tradition will be introduced to teach third, fifth, and eighth-grade students.

But many Indian academics are worried about this initiative. Even madrassa teachers are doubting its real purpose. The country’s central government, however, argues that there is nothing wrong with spreading this ancient Indian tradition to madrassas. Rather, all Indians will get benefits.

Ramesh Pokhriyal, the country’s education minister, said the culture that our Vedas, Puranas, and Upanishads have taught us is invaluable. We want to spread this benefit to Indians in madrassas and even outside the country. As a result, there is no time to underestimate this step of NIOS.

The National Institute of Open Schooling (NIOS), an autonomous body under the Ministry of Education of India, is implementing an important part of the country’s new national education policy.

But many academics are skeptical about whether the move will have a positive impact on madrassas. Amarinder Ansari, a senior professor at Jamia Millia Islamia University in Delhi, said madrassas did not fall into the organized education sector at first.

‘Yes, if a subject called Indian religion was introduced instead of Veda-Gita-Ramayana, where all the religions of the country would be taught, it might be accepted. We have to keep in mind that religion and scriptures are two completely different things. ‘