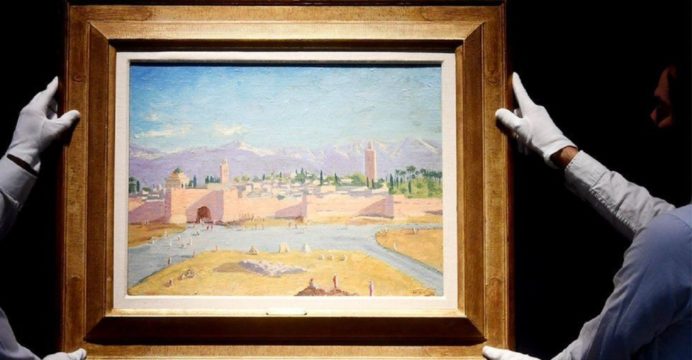 A painting by former British prime minister Sir Winston Churchill, which was owned by Angelina Jolie, has sold for £7m at auction in London.

The sale price was almost four times the top pre-sale estimate and beat the previous record for a Churchill painting, which was just under £1.8m, reports BBC.

The Tower Of The Koutoubia Mosque, painted in Marrakesh during World War Two, was sold to an anonymous buyer.

A Christie’s spokesperson called it “Churchill’s most important work”.

“Aside from its distinguished provenance, it is the only landscape he made during the war,” the spokesperson added.

Churchill, a keen artist, took inspiration from the Moroccan city and painted The Tower Of The Koutoubia Mosque oil work following the Casablanca Conference in 1943.

He went on to give the finished piece to fellow wartime leader, US president Franklin Roosevelt.

The work eventually found its way into the hands of actress Angelina Jolie when it went on sale in New Orleans in 2011.

Frenzied bidding at Monday’s sale, much of it over the phone, led to the auction gavel coming came down at the record £7m sale price, smashing the pre-sale expectations of £1.5 to £2.5m.

Christie’s said the sale figure with commission was more than £8.2m.

Two more of Churchill’s paintings also went under the hammer, with the three works together fetching £9.43m.

#AuctionUpdate A new #WorldAuctionRecord for Sir Winston Churchill with ‘Tower of the Koutoubia Mosque’ (1943) selling for £8,285,000. This is the only painting created by Churchill during the Second World War: https://t.co/JCBvGaFShW pic.twitter.com/iZMumvmwp2

Before entering politics Churchill was a career army officer and started to paint relatively late, at the age of 40.

He found a passion for the translucent light of Marrakesh in the 1930s when most of Morocco was a French protectorate.

Churchill created his painting from the balcony of the city’s Villa Taylor, beloved by the European jet set of the 1970s, after the historic conference in Casablanca, where the allies declared they would accept nothing less than Germany’s “unconditional surrender” in the war.

The painting depicts the minaret of the mosque behind the ramparts of the old city, with mountains behind and tiny colourful figures in front.