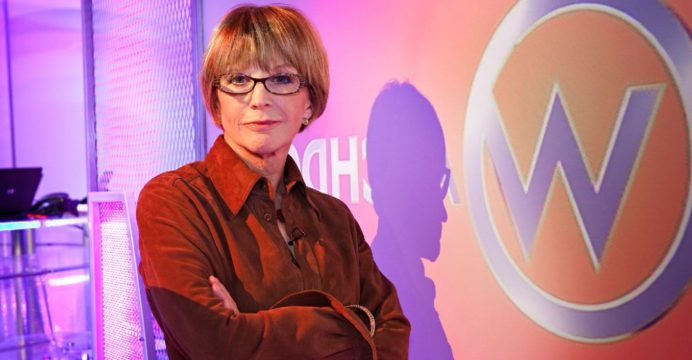 TV presenter Anne Robinson to be the new host of Countdown

TV presenter Anne Robinson is to be the new host of Countdown, Channel 4 have confirmed.

She will become the game show’s first female host in its 39-year history when she replaces Nick Hewer later this year, reports BBC.

Robinson, 76, well known for her acerbic wit on BBC quiz show The Weakest Link, said she was “beyond thrilled” to be joining Countdown.

“The show is almost as old as I am and just as historic,” she joked.

Her appointment was announced on Monday’s episode of Steph’s Packed Lunch.

The announcement comes after Nick Hewer confirmed in December that he would be departing Countdown after a decade in the hot seat.

In a series of tweets, Hewer said coronavirus lockdown had made him reconsider his career path.

Robinson said she was “particularly excited” to be working alongside the show’s two other “formidable women”, Dictionary Corner’s Susie Dent and maths expert Rachel Riley.

“Three Clever Girls Do Countdown! Don’t you love the sound of that?” Robinson asked. “Worryingly, Susie and Rachel are not only very smart but younger, prettier and thinner than me.

“Sadly, there’s no time for another facelift so I’ll have to make do with this old one,” she joked in response to previous speculation over her plastic surgery.

“I am a crossword nut so the Countdown’s conundrums I can make sense of. But the adding up and taking away – I can’t go much further than working out the fee once my agent takes his cut.

“I’m slightly scared of those brains but I think the three of us will transform things, it will be Countdown goes chic, won’t it?”

In response to the news, Dent posted congratulations on Twitter.

A big day for Countdown as we welcome a new member into the best TV family in the world (I may be biased). https://t.co/eloM5oZ4m5

Robinson cemented her presence on TV screens by fronting BBC shows Watchdog and Points Of View during the 1980s, 90s and 00s.

But she became perhaps most famous for her put-downs to contestants on The Weakest Link, which she hosted from 2000 until 2012.

This included the catchphrase “You are the weakest link, goodbye” said to each contestant as they were voted off after each round.

‘TONE DOWN THE NASTINESS’

Discussing the iconic saying, Robinson told Steph’s Packed Lunch she is planning to “tone down my nastiness”.

“The catchphrase just came about on the pilot when I got really cheesed off with a contestant and I added the goodbye,” she told host Steph McGovern.

“These things are best developed just as they happen.”

Robinson appeared in Countdown’s Dictionary Corner for a week in 1987, when the show was led by the late Richard Whiteley.

She recalled: “I was so in awe of the great Richard Whiteley. I think I only said ‘Good afternoon’ and ‘Goodbye’. Who thought I’d have the chance to follow in his giant footsteps?”

Jo Street, head of daytime at Channel 4, said: “I am a huge fan of Anne and her quick wit. I am immensely proud that this ferociously smart woman will be joining the show as host alongside the brilliant Rachel Riley and Susie Dent.”

Countdown was the first programme to be broadcast on Channel 4 and has been on air since its launch in November 1982, making it one of the longest-running quiz shows in the world.