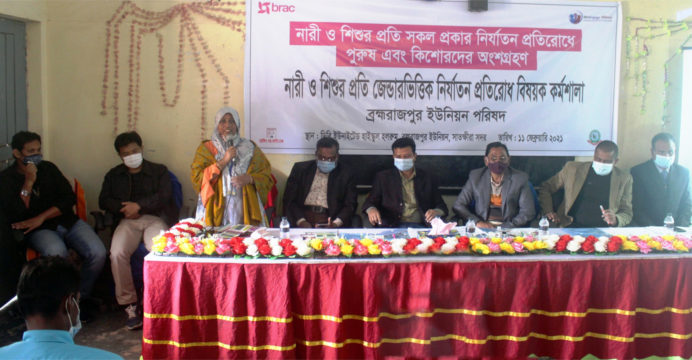 Workshop on Gender Based Violence Against Women and Children in Satkhira

A day-long workshop on the prevention of gender-based violence against women and children has been held in Satkhira.

Fatema Johra, Program Officer, District Department of Women’s Affairs, was present as the chief guest at the workshop held in the hall room of DB United Secondary School on Thursday (February 11) morning under the chairmanship of Md. Shahidul Islam, Chairman of Brahmarajpur Union Parishad.

Promoting Gender-Based Justice: BRAC and Engaging Men and Boys Network (EMB) collaborated in a workshop organized by Breaking the Silence and the Symbolic Youth Parliament, a project to reduce violence against women and children in Bangladesh by strengthening the Men and Boys Connectivity Network.

The workshop was attended by members of Brahmarajpur Union Parishad, guardians, security, and members of youth groups and adopted an integrated action plan for building a model union.