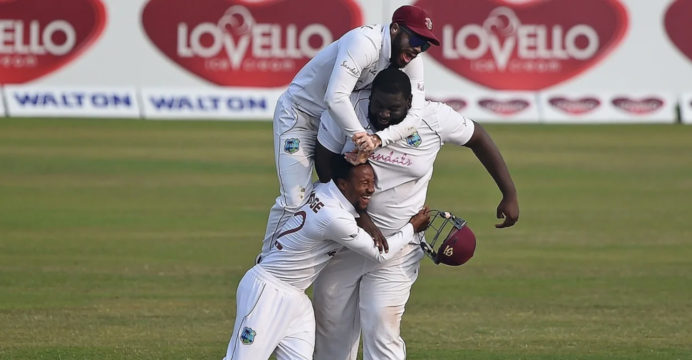 A reckless batting led Bangladesh to a disappointing 17-run defeat to a rejuvenated West Indies in the second and final Test, which forced them to be whitewashed in a Test series at Sher-e-Bangla National Cricket Stadium here today.

Bangladesh lost the first Test by three wickets, despite setting a fearsome 395-run target for West Indies, who came to the Test series, being swept in a three-match ODI series against the hosts.

For a series leveling victory, Bangladesh got a target of 231 on day four, after bowling West Indies out for a meager 117 in the second innings.

But they came up with a mindless batting, which scripted their defeat when it looked the target was not as tough as it was felt despite the wicket offered variable bounce.

Off-spinner Rahkeem Cornwall played a key role for West Indies, ending the match with 9-179.
Cornwall followed his 5-74 with 4-105 in the second innings to help the side bowl Bangladesh out for 213.

The off-spinner broke some key partnerships in various stages of the game to keep the side ahead but more than his wily off-spin it was Bangladeshi batsmen, who played injudicious shots to lead their downfall.

But Mehidy Hasan Miraz scared the visitors a bit. With Bangladesh’s ninth wicket falling 43 runs away from the victory, Miraz, who struck his maiden century in the first Test of the series, came up with an aggressive brand of cricket.

He struck Cornwall for six twice in his consecutive overs and found boundary almost in every over to keep the side interested.

But he got dismissed against the play, poking a delivery of left arm spinner Jomel Warrican at first slip, where Cornwall fittingly took a tough catch to ensure the side’s victory.