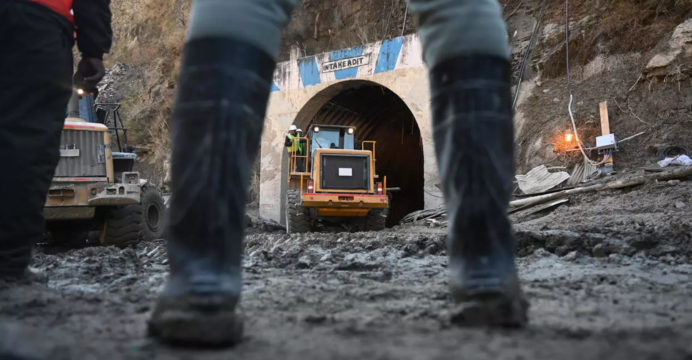 Indian rescuers try drilling from above into disaster tunnel

Indian rescuers began drilling from above a debris-filled tunnel Thursday in a desperate bid to reach dozens of people missing since a flash flood likely caused by a breaking glacier four days earlier.

Workers have toiled night and day clearing rocks and mud from the tunnel at a damaged hydroelectric plant at Tapovan in Uttarakhand in northern India since Sunday’s disaster.

More than 170 people are missing elsewhere in the Himalayan state, slightly smaller than Switzerland, after the disaster. Because of the amount of debris, only 34 bodies have been recovered so far.

As hopes fade for the missing, the tunnel operation has made slow progress — clearly frustrating desperate relatives.

“This entire rescue operation is a joke,” said Sanjay Pant, whose 24-year-old electrical engineer brother Abhishek was believed to be in the tunnel.

“We are not living in the 18th century where just one bulldozer can be used to clear tonnes of slush,” he told AFP.

“Where is our technology, where are our machines?”

On Thursday rescuers turned to a new method, attempting to drill down into one of several side tunnels to reach the missing men, authorities said.

“This is connected to the main tunnel at a point beyond the slush and debris,” rescuer Vivek Pandy told the Times of India daily.

“We hope that the trapped workers are in an auxiliary tunnel which can be accessed.”

There have been no signs of life from the missing men — thought to number between 25 and 35 — but rescuers and relatives hope they somehow they managed to stay alive.