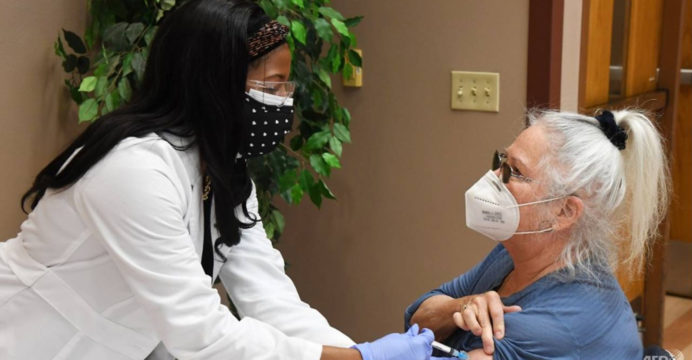 US President Joe Biden announced plans to vaccinate most Americans by the end of July with the help of 200 million newly acquired doses, as the country’s inoculation campaign kicked off a new phase in drugstores and supermarket pharmacies, some of which will offer shots as of Friday, reports BSS.

Even as the Biden administration inked deals to acquire “100 million more Moderna and 100 million more Pfizer vaccines” and Covid-19 cases fall in Europe, the World Health Organization warned against rash reopenings, in a sobering reminder of the long global battle ahead in taming the pandemic.

“At this point, the overwhelming majority of European countries remain vulnerable,” he added, pointing out the “thin line between the hope of a vaccine and a false sense of security.”

More than a million cases are still registered every week across the 53 member states in the UN agency’s European region, which includes several Central Asian countries.

With the latest vaccine purchases, the United States — the world’s hardest-hit country with more than 470,000 deaths — is on track “to have enough supply for 300 million Americans by the end of July,” Biden said, meaning enough inoculations for all eligible people.

He made the announcement Thursday after touring the National Institutes of Health near Washington, with a million previously acquired vaccine doses already headed to around 6,500 drugstores and supermarket pharmacies.

The US immunization campaign got off to a shaky start in December, and even as recently as Thursday, Los Angeles moved to temporarily close five major inoculation centers including its giant Dodger Stadium site, due to vaccine shortage.

Mass Covid-19 vaccination programs are being ramped up in many countries in the race against more contagious variants, and governments are urging populations to continue to cope with closures as the inoculation campaigns move forward.