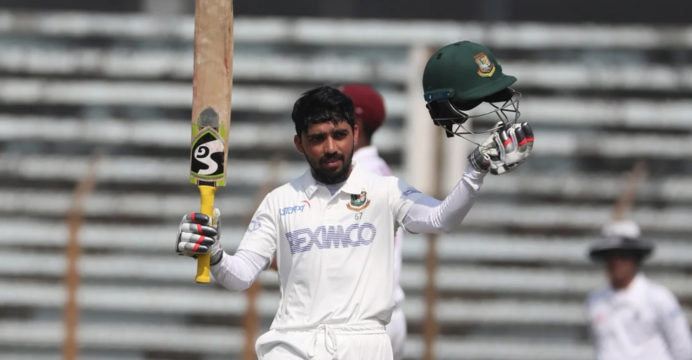 Mominul’s four records in a day of first Test

Bangladesh Test captain Mominul Haque had a fruitful day in the office on the day four game of the first Test against West Indies at Zahur Ahmed Chowdhury Stadium today.

He left the field with four records during the course of his 115-run knock that set an improbable 395-run target for the West Indies to win the Test.

Mominul became the player with most Test hundreds for the country when he smashed his 10th Test ton. He surpassed Tamim Iqbal, who has nine Test hundreds under his belt.

When Mominul pushed a Rahkeem Cornwall delivery towards cover for a quick single to bring up his hundred, he also became the Bangladeshi batsman with most Test hundreds at a particular venue – the Zahur Ahmed Chowdhury Stadium. In this venue, he has now seven hundred. His other three hundred came at the home of cricket Sher-e-Bangla National Cricket Stadium.

He is now the holder of most runs at Zahur Ahmed Chowdhury Stadium too. Mominul, playing in his 10th Test match here at this venue, has now scored 1197 runs as he went past Mushfiqur Rahim, who scored 1194 runs in 17 Tests at the ZACS. Mominul scored seven hundred and one fifty at this venue.

Last but not the least, Mominul reached the landmark of scoring 3000 Test runs as fifth Bangladeshi batsman after Tamim Iqbal, Mushfiqur Rahim, Shakib Al Hasan, and Habibul Bashar Sumon. He is the joint-fastest with Tamim Iqbal to 3000 Test runs for Bangladesh. Both the left-handers achieved the feat in 76 innings.