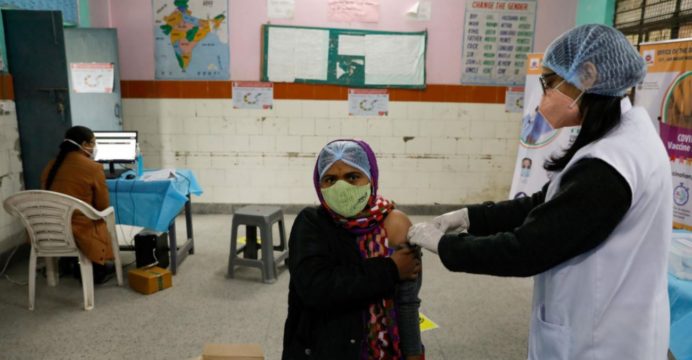 One in five Indians exposed to Covid-19, survey says

More than 21% of India’s adult population have been exposed to Covid-19, according to the latest national sero survey.

The Indian Council of Medical Research (ICMR) noted that 21.4% of 28,589 people surveyed above 18 years of age showed exposure to the virus.

But it also said that a large part of the population is still vulnerable to Covid-19. India reported 12,408 new Covid cases in the last 24 hours, reports BBC.

The national sero survey – the third of its kind – was done between 17 December and 8 January, two weeks before India kicked off its vaccination drive.

Some 4.5 million doses have been administered so far to frontline workers, who are the only ones eligible for the vaccine in the first round.

With more than 10 million cases, India has reported the second-highest number of infections globally, after the US. But in recent weeks, the daily case load has dropped sharply.

On Thursday, the Director General of ICMR, Balram Bhargava, told a press conference that the sero survey showed that the presence of Covid-19 antibodies in children aged 10 to 17 years was 25.3%.

“Among the healthcare workers, sero-prevalence was highest overall with 25.7%,” he said, adding that nurses and doctors showed a higher sero-prevalence of 26.6% as compared to administrative staff which was 24.9%.

Sero-prevalence means the presence of antibodies against Covid-19 in the population.

Earlier, a sero-survey of capital Delhi, the fifth such survey, found that over half the population – 56.13% – had developed antibodies against Covid-19. Delhi’s Health Minister said that the city “was moving towards herd immunity but only experts can give a clearer picture.”

But experts have warned against taking herd immunity for granted. “A cautious approach should be maintained despite these reports,” Dr Vinod Paul, a member of the national task force, told Times of India newspaper.