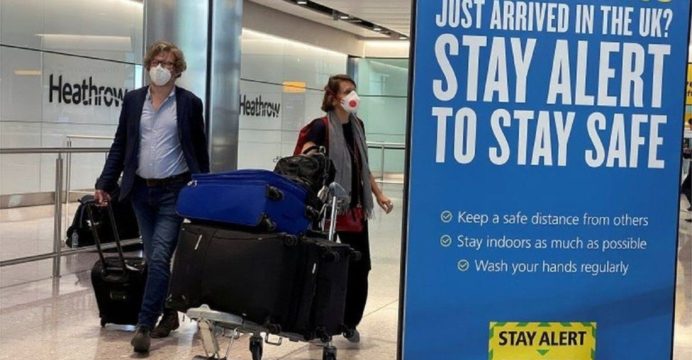 Hotel quarantine in UK to begin on 15 February

UK residents returning from coronavirus hotspots abroad will have to quarantine in hotels from 15 February, the government has confirmed.

Hotel owners will be asked to provide rooms for more than 1,000 new people every day, documents suggest.

Passengers will have to stay in their rooms for 10 nights, with security guards accompanying if they go outside. Labour called the measures “too little, too late” to deal properly with new overseas strains of Covid, reports BBC.

“It is beyond comprehension that these measures won’t even start until 15 February,” said shadow home secretary Nick Thomas-Symonds.

Quarantine hotels are expected to be set up near airports including Heathrow, Gatwick, London City, Birmingham, Bristol, Manchester, Edinburgh, Glasgow and Aberdeen.

The rules will apply to UK nationals and residents returning to the country from 33 “red list” Covid-19 hotspots – including several South American and African countries where new Covid variants have been detected in large numbers of people – and passengers will be expected to pay for the cost of the accommodation.

Ministers are also likely to increase the fines for people who break the rules. Home Office sources have said they expect fines will have a deterrent effect so traveller numbers are likely to fall from 1000 a day swiftly.

According to documents seen by the BBC, the government wants quarantine hotels to be made available “on an exclusive basis”.

Guests will have three meals a day in their rooms, with tea, coffee, fruit and water being available.

Security will “accompany any of the arrived individuals to access outside space should they need to smoke or get fresh air”, one document says.

One hospitality industry source said the government estimated the cost at about £80 per night per person.

A Department of Health spokesperson said it was working “at pace” to roll out managed quarantine facilities in the run-up to 15 February.

“In the face of new variants, it is important that the government continues to take the necessary steps to protect people and save lives,” they said.

The department says it sent commercial specifications on Thursday evening to hotels near air and sea ports asking for proposals on delivering quarantine facilities ahead of formal contracts being awarded.

The government is expected to set out further details next week on how passengers will be able to book into the designated hotels.

It has also been announced that Mr Hancock will chair a new Cabinet sub-committee to oversee efforts to implement mandatory quarantine and enhanced testing aimed at preventing the spread of new Covid variants.

Mr Thomas-Symonds said: “We are in a race against time to protect our borders against new Covid strains. Yet hotel quarantine will come in to force more than 50 days after the South African strain was discovered.”

Labour has called on the government to extend hotel quarantining to those returning to the UK from all countries, not just the areas on the “red list”.

But the Conservatives described the plan as “implausible”, arguing it would mean putting around 20,000 people in hotels every day.

A further 915 people have died within 28 days of a positive coronavirus test in the UK, according to the government’s daily figures.